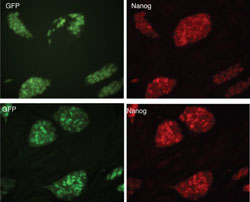 The ability to reverse aging may reside in a stem cell gene named Nanog.

In a series of experiments at the University at Buffalo, the gene kicked into action dormant cellular processes that are key to maintaining healthy bones, arteries and other telltale signs of growing old.

“Our research into Nanog is helping us to better understand the process of aging and ultimately how to reverse it,” says Stelios T. Andreadis, PhD, professor and chair of the Department of Chemical and Biological Engineering at the UB School of Engineering and Applied Sciences, and the study’s lead author.

Additional authors come from UB’s Department of Biomedical Engineering, a joint program between UB’s engineering school and the Jacobs School of Medicine and Biomedical Sciences at UB, and the Department of Biostatistics and Bioinformatics at Roswell Park Cancer Institute in Buffalo.

To battle aging, the human body holds a reservoir of nonspecialized cells that can regenerate organs. These cells are called adult stem cells, and they are located in every tissue of the body and respond rapidly when there is a need.

But as people age, fewer adult stem cells perform their job well, a scenario which leads to age-related disorders. Reversing the effects of aging on adult stem cells, essentially rebooting them, can help overcome this problem.

Andreadis previously showed that the capacity of adult stem cells to form muscle and generate force declines with aging. Specifically, he examined a subcategory of muscle cells called smooth muscle cells which reside in arteries, intestines and other tissues.

“Not only does Nanog have the capacity to delay aging, it has the potential in some cases to reverse it,” says Andreadis, noting that the embryonic stem cell gene worked in three different models of aging: cells isolated from aged donors, cells aged in culture, and cells isolated from patients with Hutchinson-Gilford progeria syndrome.

Additionally, the researchers showed that Nanog activated the central regulator of muscle formation, serum response factor (SRF), suggesting that the same results may be applicable for skeletal, cardiac and other muscle types.

The researchers are now focusing on identifying drugs that can replace or mimic the effects of NANOG. This will allow them to study whether aspects of aging inside the body can also be reversed. This could have implications in an array of issues to improve quality of life and lifespan.