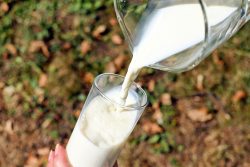 A study conducted at Brigham Young University by exercise scientists has found that people who consume low fat milk experience several years less biological aging when compared to those who drink high fat milk, both 2% and whole milk. This supports existing dietary guidelines which do not recommend high fat milk as part of a healthy diet.

The study assessed 5,834 adults and included data from the National Health and Nutrition Examination Survey as well as questionnaires for the participants. They looked at the relationship between telomere length along with milk intake frequency (daily drinkers vs. weekly drinkers or less) and the milk fat content that was consumed (whole vs. 2% vs. 1% vs. skim).

Telomeres are the end caps of human chromosomes and act like biological clocks. They are correlated with age. As people get older, their telomeres get shorter. People who consumed more high fat milk showed telomeres that were significantly shorter.

For every 1% increase in milk fat consumed (drinking 2% vs. 1% milk), telomeres were 69 base pairs shorter in the adults in the study. This translates into more than four years in biological aging. In the very extreme milk drinkers, the adults who drank whole milk had telomeres that were a striking 145 base pairs shorter.

Half of the adult participants in the study consumed milk on a daily basis with another quarter consuming milk at least weekly. Less than a third of the adults consumed full fat milk and an additional 30% reported drinking 2% milk. Approximately 10% consumed 1% milk and another 17% consumed non fat milk. 13% did not drink any cow milk.

Surprisingly, the study found that people who did not consume milk at all had shorter telomeres than adults who drank low fat milk meaning they aged quicker than skimmed milk drinkers. This suggests that there may be some anti aging benefits to consuming milk, but there is sweet spot to be found.

The study suggests that the milk fat and subsequent link with cellular aging was most likely due at least in part to increases inflammation and oxidative stress caused by the increase in saturated fat consumption. The team believes that this saturated fat in high fat milk is the culprit that causes the damage and contributes to the death of tissues in the human body.

Milk is one of the most controversial foods in the U. S. Current dietary guidelines for Americans encourage adults to consume low fat milk, both 1% and non-fat, and avoid high fat milk altogether. It isn’t necessarily a bad thing to drink milk, but according to the study, the type of milk matters.

Milk Fat Intake and Telomere Length in U.S. Women and Men: The Role of the Milk Fat Fraction