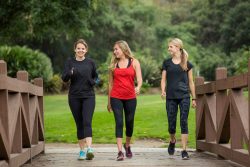 Engaging in more steps daily, either in short spurts or all at once may help you live a longer life. This is according to preliminary research which will be presented at The American Heart Association’s Epidemiology, Prevention Lifestyle and Cardiometabolic Health Conference 2021.

Walking is one of the easiest and safest ways to improve health and fitness including heart health. The American Heart Associations fitness guidelines for adults recommends per week a minimum of 150 minutes of moderate exercise or either 75 minutes of strenuous physical activity or possibly a combination of both.

Popular step counters and fitness apps make it simple to count steps. Researchers used wearable step counting devices to compare the results of uninterrupted series of steps of 10 minutes or longer with occasional shorter spurts such as typical daily activities or something like climbing stairs.

In the past researchers were limited to just measuring activities people would recall on a questionnaire. New advances have allowed researchers to measure even short spurts of activity.

16,732 women from 2011 to 2015 wore waist type step counters which would measure their daily steps and also patterns of walking for four to seven days. The women in the study were aged 60 and over with an average age of 72 and were mostly white women, non-Hispanic. They were all involved in the Women’s Health Study which was a national, large study of cancer, heart disease and a variety of other long-term prevention of disease.

The total number of steps were divided into 2 groups – one for 10 minutes or longer lengths of walking with just a few interruptions, the other group participated in shorter spurts of walking while involved in daily activities such as climbing stairs, housework or walking to or from a car. For follow-up, the research team tracked deaths that occurred from any cause for about six years which was until December 31, 2019.

*804 Deaths occurred during the entire period of 2011 to 2019.
*Participants who walked more steps in shorter spurts lived longer even regardless of the number of steps they took in longer and uninterrupted bouts of steps. Benefits appeared to level off at around 4,500 steps in short spurts per day.
*When comparison was made to no steps daily, increases of every 1,000 steps daily was linked to a decrease in death of 28% during the research follow-up period.
*Decrease of death of 32% was shown in participants who participated in more than 2,000 daily steps in uninterrupted periods.

An earlier analysis of the identical women found that those women who participated in 4,500 daily steps had an outstanding lower risk of death in comparison to the women who were least active. The results have shown that the finding holds even for those women who did not take part in any uninterrupted periods of walking. Engaging in 2,000 or even more added steps during bouts was linked to further longevity benefits.

Since older people tend to face a variety of barriers to a structured exercise program, many may find it more enjoyable and also more convenient to increase their daily walking habits such as doing extra housework, parking further away from destinations such as stores, and adding to their yard work.

According to cardiologists, regular physical activity has been associated to a decreased risk of high blood pressure, diabetes and improved lipid profiles. Walking has also been shown to reduce the risk of heart disease. A small increase can have a profound effect on cardiovascular health.

In regards to the short term, people who engage in walking have improved body fitness and composition. In regards to the long term, more steps engaged in on a daily basis can decrease the risk of cardiac events, coronary heart disease and death. Walking can additionally boost muscle strength and help prevent injuries and falls.

Walking is additionally an excellent exercise for the whole body. It not only utilizes muscles in the whole leg, but also work the gluteus muscles and the core for propulsion and stability. And changing the pace during a walk can lead to even more health benefits. Walking faster for 30 second intervals then engaging in a slower period for another 30 seconds can increase a person’s heart rate which will help boost cardiovascular health and burn more calories.

Evidence has also shown that walking more on a daily basis can help improve sleep quality. Other evidence has shown that those who are physically active have better mental health than those who who aren’t as active. Even leisurely walking can boost positive feelings and emotions and reduce symptoms of depression.

A person does not need to commit to long strolls every day to improve their health. Just working in bursts of steps throughout daily activities has shown to have the same health benefits such as better sleep quality, better heart health and a more positive mental attitude.

To view the original scientific study click below:
Taking more steps daily may lead to a longer life