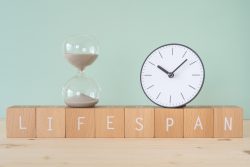 Longevity research has commonly used a nematode worm called caenorhabditis elegans in studies. This is due to its genetic makeup being similar to humans and it has a relative short lifespan, usually 4 weeks or less. Earlier research to improve these worms lifespan resulted in various interesting outcomes by modifying their rapamycin and insulin signaling pathways, which resulted in a 30% and 100% increase in their lifespan, respectively. The researchers then wondered what would happen from modifications made to both of these pathways at the same time.

To find out the answer, international teams of scientists were organized which included researchers from the Buck Institute for Research on Aging and Nanjing University. They modified both the rapamycin and insulin pathways to a grouping of C.elegans worms expecting to see a 130% lifespan increase. But, to their surprise the worms lifespan increased by 500%.

So the question now is, could this have an effect on human regenerative medicine? Of course, humans and worms are different, but they do have similar biology. They both possess “conserved” pathways of insulin and rapamycin, which means that in both organisms these have been maintained. In earlier times, both C.elegans and humans have had a common ancestor, such as chimpanzees and humans have. But although evolution has changed humans bodies so much that C.elegans and humans have deviated from eachother, quite a bit of the fundamental biological functions have remained unchanged.

Therefore, if human rapamycin/insulin pathways were modified would it increase human lifespan? Simply put, we just cannot know what would happen yet. But, in other species such as mice, by modifying these pathways it has shown to affect lifespan in a positive way. Therefore, this conveys that the modifications are not only beneficial to just one species. From the knowledge we have, not including our intellectual capacity, the way our bodies function is basically no different than our close relatives in the animal kingdom. Maybe this will be how a human could reach a 400-year long lifespan. We will have to wait and see.