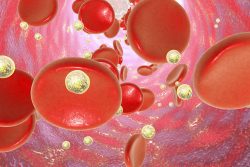 Bioengineers have discovered a new strategy that can restore stem cells that have been damaged and also enable them to grow new tissues again. The novel drug delivery system might help infants who were born from pregnancies that were complicated.

In the umbilical cord of newborns lies potential stem cells that are life saving and can be used to fight diseases like leukemia and lymphoma. This is why a lot of new parents elect to “bank” their babies umbilical cord blood which is rich in stem cells. However, in the 6% to 15% of pregnancies that have been affected by gestational diabetes, parents do lack this option due to the condition which damages the stem cells and renders them useless.

At the heart of the new approach are specifically engineered nanoparticles. At only 150 nanometers in diameter, each spherical nanoparticle has the ability to store medicine and deliver it just to the stem cells themselves by directly attaching onto the surface of the stem cell. Because of their special formulation the particles will slowly release the medicine making it very effective even at doses that are low.

The process has been described like this – each stem cell is like a soldier and is effective and smart. It knows what to do and where to go. However, the soldiers that they are working with are weak and injured. Through providing them with the nanoparticle “backpack” they are giving them what they require to be able to work effectively again.

The primary test for the new stem cell backpack was whether or not they could form new tissues. The researchers tested the stem cells that were damaged without “backpacks” and found that they moved slowly and formed tissues that were imperfect. However, when they applied “backpacks” stem cells that had been previously damaged started to form new blood vessels. This happened both when implanted under the skin of mice in the lab and in synthetic polymers, two environments that are meant to copy the human body conditions.

It may be years before this new technique could reach health care settings, but it has cleared the path of any method that has been developed so far. Methods now that involve injection of the medicine directly into the bloodstream come with a variety of unwanted side effects and risks. However, the new technique used only materials and methods that have already been approved for clinical settings by the FDA.

The team hopes that their approach will be utilized to restore cells that have been damaged by other types of complications of pregnancies such as preeclampsia. Rather than discarding the stem cells, in the future the team hopes clinicians will have the ability to rejuvenate them and utilize them to regenerate the body.