When we first tested Stem Cell 100 on drosophila we were very pleased that it doubled both their average (mean) and maximum lifespans. As far as we know no one had ever accomplished that before. The study was conducted with a control group that received a normal diet and the SC100 group which received the same diet with Stem Cell 100 added starting the second day after hatching.

People who take Stem Cell 100 are typically middle age or older. They did not start taking the nutraceutical supplement during childhood. So we wondered what would happen if the fruit flies started it much later in life. The study was repeated with a third group added which started Stem Cell 100 at the age of 36 days. For perspective the oldest 5% of the fruit flies in the control group typically live 45 – 50 days. In the first study the average (mean) lifespan was about 20 days for the control group and 40 days for the SC100 group. So 36 days is fairly old for a fruit fly.

The results of the study with the third group starting Stem Cell 100 much later in life were better than expected. As you can see in the graphs below the maximum lifespan of the oldest 5% averaged 120 days which was almost as old as the SC100 group that started with the supplement added to their food from the second day after hatching. This result implies that one can take Stem Cell 100 later in life and still get excellent longevity benefits! Also as we described in an earlier blog post the SC100 drosophila regardless of when they started Stem Cell 100 were still flying around, fertile and laying eggs long after the oldest of the control group had died of old age showing that they stayed youthful and healthy. 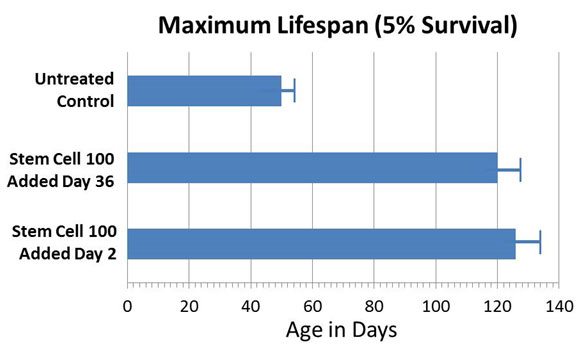 Stem Cell 100+ contains the same botanical extracts as Stem Cell 100 with additional ingredients and an improved formula that make it even more effective.