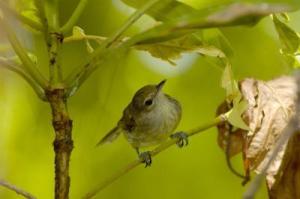 Researchers at the University of East Anglia have found that biological age and life expectancy can be predicted by measuring an individual’s DNA.

They studied the length of chromosome caps — known as telomeres — in a 320-strong wild population of Seychelles Warblers on a small isolated island.

Published Nov. 20 in Molecular Ecology, their research shows that individuals differ radically in how quickly their telomeres shorten with age, and that having shorter telomeres at any age is associated with an increased risk of death. Telomere length is a better indicator of future life-expectancy than actual age and may, therefore, be an indicator of biological age.

The 20-year research project is the first of its kind to measure telomeres across the entire lifespan of individuals in a wild population.

Telomeres are found at the end of chromosomes. They act as protective caps to stop genes close to the end of the chromosome degenerating — like the hard plastic ends of a boot lace.

Lead researcher Dr David S Richardson said: “Over time these telomeres get broken down and become shorter. When they reach a critical short length they cause the cells they are in to stop functioning. This mechanism has evolved to prevent cells replicating out of control — becoming cancerous. However the flip side is that as these zombie cells build up in our organs it leads to their degeneration — aging — and consequently to health issues and eventually death.

“Telomeres help safeguard us from cancer but result in our aging.”

“We wanted to understand what happens over an entire lifetime, so the Seychelles Warbler is an ideal research subject. They are naturally confined to an isolated tropical island, without any predators, so we can follow individuals throughout their lives, right through to old age.

“We investigated whether, at any given age, their telomere lengths could predict imminent death. We found that short and rapidly shortening telomeres were a good indication that the bird would die within a year.

“We also found that individuals with longer telomeres had longer life spans overall.

“It used to be thought that telomere shortening occurred at a constant rate in individuals, and that telomere length could act as an internal clock to measure the chronological age of organisms in the wild.

“However while telomeres do shorten with chronological age, the rate at which this happens differs between individuals of the same age. This is because individuals experience different amounts of biological stress due to the challenges and exertions they face in life. Telomere length can be used as a measure of the amount of damage an individual has accumulated over its life.

The research is important because while these ideas have been researched in the lab, they have never been tested in a wild environment.

“It would be virtually impossible to do such a study in humans,” said Dr Richardson. “For one thing it would take a very long time to study a human lifespan. Also in humans we would normally, quite rightly, intervene in cases of disease, so it wouldn’t be a natural study.

“We found that telomeres are linked to body condition and reflect the history of oxidative stress that has occurred within an individual’s lifetime. The healthier you are, or have been, the better telomeres you have. But it’s hard to know whether this is a consequence of being healthy, or a cause.

“Oxidants attack telomeres. So things like smoking, eating foods that are bad for you, and putting your body through extreme physical or mental stress all have a shortening affect on telomeres.

“All these stresses do damage to our bodies. You hear people saying ‘oh they look like they’ve had a hard life’. This is why. A shortened telomere shows an accumulation of damage life has done to you.”

The study was funded by the Natural Environment Research Council (NERC) and carried out in collaboration with conservation group Nature Seychelles.