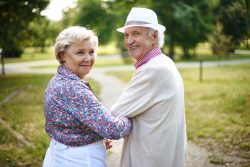 What is the secret to living to 100? Is there one? A team of researchers at the Center on Healthy Aging at the Univ. of Calif., San Diego created a study to find out. It’s participants were aged from 21 to 99 and over. The study concentrated on a number of small villages in Italy, where it was shown these people lived a long and healthy life. They decided to focus the study on the participants’ character traits instead of their diet and heredity.

The results showed that although the older participants (aged 90 and over) had worse physical health, their mental well-being was better then the younger participants. Their mental health was rated on issues such as their resilience, depression, optimism, anxiety, stress and their overall mental and physical well-being. Some of these participants had been through such things as war, traumatic events, traveling and life’s ups and downs. But they still showed bonds with family, religion, worked hard with resilience and optimism and also loved the land.

It was shown that they were much more able to deal with “life” and avoid stressors. They were compassionate, emotionally stable and were able to make smart decisions.

The older participants scored higher on the measures of decision making, self confidence, mental well-being and were less anxious and depressed. They showed they were more adaptable with having strong social support and a high level of confidence. They had a sense of pride about their personal stories and things they had to overcome in life.

All of the older participants had a love of their land and thus giving them a purpose in life. Almost all of them still work on their houses and the land. They have an attitude that they will not give up their wonderful life, therefore, giving them a sense of grounding.

This study concluded that a long life was maintaining a balance to be able to overcome adversities with a positive attitude with close ties to family, a purpose in life, religion and a love of the land.