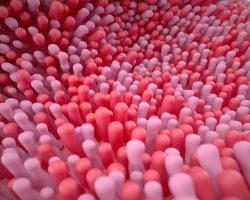 A recent study at the University of Copenhagen has revealed findings that could make it easier to manipulate stem cells for stem cell therapies. These new findings challenge the traditional knowledge of the development of stem cells.

What the findings show is that the destiny of intestinal cells is determined by the cell’s surroundings rather than being predetermined. All developing gut cells have the ability to become stem cells. The research team has discovered that the development of these immature intestinal cells have the same probability for developing into stem cells in the fully developed organ.

The results show that it is really just a matter of being in the right place at the right time. Signals from the cell’s surroundings will determine their fate. Once the signals that are necessary for the immature cell to develop into a stem cell are identified, it will be much easier to manipulate cells in the desired direction.

During life the bodies organs are maintained by stem cells which also repair damage to tissues. As a better understanding of the factors that help determine whether an immature cell develops into a stem cell unfolds, medical professionals will have information that will assist in the development of more stem cells for transplantation and therapy.

The recent study has enabled scientists to gain greater insights into the mechanisms through which cells in the intestines develop into stem cells. So far the scientists say that cells in the gastrointestinal tract have these particular characteristics. However, they do believe this might be a general phenomenon in organ development.

Following the initial tests, the cells which the team previously believed to be stem cells were only able to explain just a fraction of the growth of the intestines. They concluded along with a collaboration with mathematical statistics experts of the University of Cambridge, that the surprising hypothesis was that all intestinal stem cells have the identical chance of becoming stem cells. Additional tests proved the hypothesis.

The next step for the team is to precisely determine which signals are required for immature cells to develop into the kind of stem cells needed. Through using stem cell therapy and transplantation, it is possible to supplement a person’s own stem cells with healthy new stem cells which can assist in repairing and replacing damaged tissue.