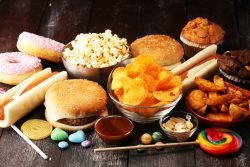 Hyper-palatable foods are those made with a mix of ingredients that light up people’s brain-reward neural circuitry and overpower mechanisms that are supposed to signal when we’ve had enough to eat. Because these foods essentially enhance their consumption, overweight and obesity can be the result.

This class of foods which are often processed foods or sweets containing alluring combinations of sugar, fat, sodium and carbohydrates, have been found to be some of the most highly consumed foods in the United States. Food companies have devised formulas for these foods to make them highly palatable and thus enhance their consumption.

While there is no standardized definition for hyper palatable foods, typically descriptive definitions such as “desserts”, “fast foods” and “sweets” will identify these types of foods. However, those words aren’t specific to the actual mechanisms through which the ingredients in a particular food lead to their enhanced palatability. Defining these types of foods has been a substantial limitation.

A team sought to define the criteria for hyper palatable foods through conducting a literature review and then employing nutrition software and applying their definition to over 7,700 food items. They essentially took all the descriptive definitions of these foods from the literature and one by one entered them into the nutrition program to see how it quantifies a food’s ingredients. The software provides in fine grained detail a data set which specifies how many calories, fat, sodium, sugar, carbohydrates and fiber are in the foods.

They looked for items that met the criteria established by the literature review as enhancing palatability and specifically when the synergy between key ingredients in a certain food creates an artificially palatable experience which is larger than any key ingredient would produce by itself.

Essentially the team wanted to be able to identify foods that seem to cluster together which what seemed like similar levels of at least two ingredients. That is the theoretical basis for producing the synergistic palatability effect. Through a process using visualization, they were able to see there were essentially three food types that appear to cluster together in relation to their ingredients.

Once the team was able to quantify characteristics of hyper palatability, they were able to apply their definition to foods that are cataloged in the U. S. Department of Agriculture’s FNDDS (Food and Nutrient Database for Dietary Studies). The hope was to discover just how prevalent these types of foods are in the American diet.

The team discovered that 62% of foods in the FNDDS met the criteria for at least one of the three clusters they had identified. Most of those foods (70%) were high in sodium and fat (such as egg or meat dishes and milk based foods like cheese dips). 25% of the hyper palatable foods were high in sugar and fat and 16% of those foods were also high in sodium and carbohydrates. Less than 10% qualified in more than one cluster.

More evidence is needed, however if research starts to support that these hyper palatable foods may be problematic for society, it might warrant food labels saying “this is hyper palatable”. And it might also lead to restriction of certain foods that are available in particular places such as elementary school cafeterias that serve kids whose brains are still developing and might be impacted by these kinds of foods.

The plan is to build on the current work by analyzing how the ubiquity of these hyper palatable foods in the U.S. diet compares to foods in other countries. A grant was recently received by the team to research foods consumed in Italy where the Mediterranean diet is prevalent.

Hyper Palatable Foods: Development of a Quantitative Definition and Application to the US Food System Database..