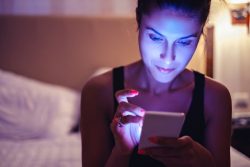 Although blue light may not be shining in someones eyes, it can still affect a person’s longevity. A new study has suggested that the blue wavelengths which are produced by light emitting diodes from phones, household fixtures and computers damage cells in the brain and in the retinas.

The research conducted at Oregon State University utilized the common fruit fly in its study as it is an important model organism due to its developmental and cellular mechanisms which it shares with other animals and also humans.

The team examined how fruit flies respond to daily 12 hour exposure periods to blue LED light. This is light that is similar to the blue wavelengths in devices such as tablets and phones. They found that the blue accelerated aging in the fruit flies.

Flies that were subjected to the daily 12 hours in light and then 12 hours in darkness had shorter lives when compared to flies that were kept in total darkness or those that had been kept in light with the blue wavelengths filtered out. The fruit flies that had been exposed to blue light showed damage to their brain neurons and retinal cells and also had impaired locomotion. Their ability to climb the walls in their enclosures which is a common behavior, was diminished.

Some of the flies used in the study were mutants that do not develop eyes and those eyeless flies also experienced locomotion impairments and brain damage. This suggests that flies don’t have to see the blue light to become harmed by it.

The team was initially surprised that the blue light accelerated the aging process in the flies. They measured expression of genes in the older flies and discovered that stress response, protective genes were expressed when the flies were kept in the light. They hypothesized that light was regulating the genes. They then wondered if it is the light that is harmful so they looked at the spectrum of light. It was quite clear that although light without the blue light slightly shortened the flies lifespan, blue light alone shortened their lifespan quite dramatically.

Natural light is critical for the body’s circadian rhythm which is the 24 hour cycle of physiological processes such as hormone production, brain wave activity, and cell regeneration which are important to sleeping and feeding patterns. There is evidence that suggests that increased exposure to artificial light is a risk factor for circadian and sleep disorders. With the widespread use of LED device displays and lighting, people are exposed to increasing amountsof light in the blue spectrum. Commonly used LEDs emit a high fraction of blue light. However, LED lighting has not been used for a long enough period to know its effects across the lifespan of humans.

Flies when given a choice avoid blue light. The team is going to test to see if the same signaling that causes them to escape blue light in involved in longevity. Advances in medicine and technology could work together to address the damaging effects of blue light if the research in flies proves applicable to humans.

As science looks for a variety of ways to help people stay healthy as they live longer, creating a healthier spectrum of light may be a possibility, not only in terms of better sleep, but in terms of overall health.

There are a few things people can do to protect themselves that do not involve being in darkness for hours. Eyeglasses that have amber lenses will filter out blue light and will protect the retinas. Some laptops, phones and other devices can be set to reduce blue emissions. Blue light screen filters can be purchased and cut to size for almost any device including LED televisions. Special light bulbs are available that are filtered to reduce or eliminate blue light. These products can be found on Amazon.com or LowBlueLights.com. In the future there might be phones that auto adjust their display depending on length of usage which the phone perceives. This kind of phone while most likely difficult to create, would have a big impact on health.