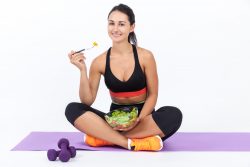 As we age, the human immune system becomes less effective at fighting infections and less responsive to vaccinations. The aging immune system is also associated with chronic inflammation which increases the risk of almost all conditions and diseases linked to old age.

The good news is that by adopting the right diet and exercising, a person can go a long ways towards maintaining healthy immunity into older age. We now live in a time of high average life expectancies and our long evolutionary history has adapted us for a variety of lifestyles and these have drastically changed.

Immunity, as a result, weakens in older age and also becomes imbalanced. Two branches of the immune system are affected – the innate immunity and the adaptive immunity. Innate immunity is our first line of defense against infections and will fail to resolve after the initial threat has passed which in turn causes chronic systemic inflammation.

Adaptive immunity is responsible for remembering and attacking particular pathogens and will steadily lose its ability to defend the body against bacteria, viruses, and fungi. The loss of adaptive immunity which comes with older age causes people to become more susceptible to infections and can also reactivate dormant pathogens that had been previously suppressed. The weaker adaptive immunity associated with older adults means their bodies will respond less strongly to vaccines.

Researchers have labeled the persistent low level inflammation that is related to almost all conditions linked to older age “inflammaging”. Some inflammation is part of the normal repair process for healing and is essential in keeping us safe from viral and bacterial infection along with noxious environmental agents. However, not all inflammation is good. When it becomes prolonged and persists, it can become destructive and damaging.

When a younger person is affected by an infection or injury, their immune system switches to an anti-inflammatory response. This does not happen as effectively in older people which is due to the accumulation of “senescent” or aged immune cells.

Senescent cells contain shorter telomeres which are the protective caps at the tips of chromosomes. They prevent vital genetic material from becoming lost when the chromosome is duplicated during the replication of cells.

High levels of IL-6 and TNF-alpha have been linked to mortality and disability in older people. They have a noticeably strong association with cardiovascular disease, type 2 diabetes, cancer and
neurodegenerative disease.

These particular changes in the frequency of both M1 and M2 cells seems to be linked to an increased risk of developing plaques which are comprised of debris and fat which will block the arteries in atherosclerosis.

The immune system will learn to recognize and neutralize particular pathogens through adaptive immunity. An immune cell known as a T cell plays a critical role in adaptive immunity. When an infection occurs, naive T cells will learn to recognize the specific pathogen that is involved. They then will differentiate into cells which are specialized to mount additional responses against the identical pathogen.

The number of T cells remains constant throughout a person’s life. However, the pool of naive undifferentiated cells will steadily shrink over the years as more cells commit to taking on specific infections. As a result, the bodies of older people become less able to mount immune responses that are effective to new infections. And for the same reason, vaccines provoke weaker response from the immune system that is aging and therefore provide less protection. Research has suggested that repeated flu immunizations may lead to reduced antibody responses.

Many older people harbor a latent infection that is known as human cytomegalovirus which is very common and persistent but doesn’t typically produce symptoms. In some older people, this particular infection may slowly deplete their immune resources which makes them more susceptible to other viral infections and reduces the effect of flu vaccines.

Additionally with this slow decline in immunity with age, senescent T cells will produce more pro-inflammatory cytokines including IL-6. These will in turn stoke the chronic and systemic inflammation of inflammaging.

Although there isn’t anything that will prevent aging, there are a variety of lifestyle changes a person can make to help in staying healthy into old age.

Exercise has a significant effect on the immune system. Unfortunately, people become less active as they age. However, there is evidence that suggests getting as much exercise as is possible can slow or even reverse some of the effects caused by immunosenescence.

Skeletal muscle will produce a range of proteins that are known as myokines which reduce inflammation and can preserve immune function. It would make sense therefore, that maintaining muscle mass through exercise will help protect the body against infection and a variety of diseases.

One study discovered that aerobic fitness engaged in by 102 healthy males aged 18 to 61, was inversely proportional to the number of senescent T cells found in their blood after adjusting for age. This means that increased physical fitness was linked to less immunosenescence. The males who were most fit not only had fewer senescent T cells, but also a greater number of naive T cells.

Another study compared immune responses from 61 healthy males aged 65 to 85 to a flu vaccine. About 1/3 of the males were intensively active through sports or running, 1/3 were moderately active, and 1/3 were mostly inactive. After adjusting for age, the study found that the intensively and moderately active males produced more antibodies in response to the vaccine than the less active participants.

Amazingly, the males who were more active had higher serum concentrations of antibodies to some of the flu strains even prior to undergoing vaccination.

In regards to diet, there is plenty of indirect evidence to suggest that diet helps determine older adult’s risk of developing sarcopenia. This condition will cause a loss of muscle mass, functionality and strength. There seems to be a two way relationship between the immune system and skeletal muscle. Muscles will produce anti-inflammatory myokines. However, recent evidence has suggested that chronic inflammation also speeds up the muscle loss caused by sarcponenia.

Dietary supplements such as Vitamin D and polyunsaturated fatty acids may help reduce the risk of sarcopenia due to their anti-inflammatory properties. In addition, growing evidence suggests that people who consume a Mediterranean diet are less likely to become frail as they age. Frailty meaning losing muscle strength, tiring easily and walking slowly.

The Mediterranean diet consists of large amounts of leafy vegetables, fruits and olive oil; moderate amounts of poultry, dairy and fish; and low amounts of added sugar and red meat. Earlier studies have shown that this diet is linked to the lower risk of obesity, type 2 diabetes, cancer, and cardiovascular disease.

A 2018 review of observational studies, shows people who adhere the most closely to this type diet were less than half as likely to develop frailty over a 4 year period compared to those who followed it the least likely.

And while muscle plays a role in decreasing inflammation in older people, fat or adipose tissue may have the exact opposite effect. Normal aging will often lead to weight gain due to an accumulation of adipose tissue around the organs and beneath the skin. And adipose tissue may make a profound contribution to inflammaging.

Close to 30% of the pro-inflammatory cytokine IL-6 in the bloodstream may originate from adipose tissue. Having overweight and obesity in older age may therefore contribute to chronic inflammation. Animal and human studies have suggested that the immune system of people with obesity may produce fewer antibodies in response to the flu vaccine. Eating a healthful diet such as the Mediterranean diet and exercising appear to counter the effects of immune aging. This may be in part due to the way these two lifestyle habits prevent excessive weight gain. Studies suggest that older people who have a moderate weight gain and who exercise regularly have fewer senescent T cells and lower levels of inflammatory cytokines in their blood.

Whether or not exercise, diet and weight loss can reverse immunosenescence remains open for future research.