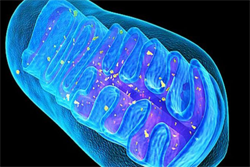 New research has shown evidence and interactions between psychological and physical health effects that involve mitochondria according to experimental studies conducted by Martin Picard of Columbia University and Bruce S. McEwen of The Rockefeller University. Mitochondria are specialized cellular structures with their own DNA and are found in nearly every type of cell in the body. Sometimes referred to as cellular ?powerhouses?, they generate signals and energy required for life. When they are not working correctly, they can cause severe diseases affecting many of the different body systems.

A total of 23 experimental studies on animals conducted by researchers around the world points to mitochondria as a potential intersection between psychosocial experiences and biological stress responses. Researchers have found that acute and chronic stress influenced specific aspects of mitochondrial function, especially in the brain. A wide range of factors including genes, diet and behavior may also influence mitochondrial vulnerability to stress. The Doctors have also outlined a conceptual framework by which mitochondria may convert the effects of psychological stress on to physical health. Evidence indicates that mitochondria sense, integrate and signal information about the environment and includes stress induced mediators which cause functional and structural recalibration of the mitochondria.

Describing the functional and structural changes that mitochondria undergo as response to chronic stress, the Doctors introduced the concept of MAL (Mitochondrial Allostatic Load). These changes may lead to widespread health effects such as increased inflammation leading to a higher risk of disease and damage to cellular DNA leading to accelerated aging. It appears that mitochondria is involved in regulating the body?s stress reactivity systems including controlling immunity, inflammation and the brain. Damage to mitochondrial DNA has been associated with a biological aging clock. Recent studies have shown that mitochondria affect the rate of aging in mammals, however it is not clear whether this is the case in humans.

Emerging evidence on the role of mitochondria and translating the effects of stress on physical health extend the reach of mind-body research into the cellular/molecular domain. The findings are particularly exciting for psychosomatic medicine with its focus on reintegrating the mind and body. The findings also represent the core foundation of current biomedical training and practice. The doctors emphasize that more research is needed to test various elements of their model in humans and to further consider the dynamic bi-directional interactions between important physiological systems and mitochondria.

Objective Mitochondria are multifunctional life-sustaining organelles that represent a potential intersection point between psychosocial experiences and biological stress responses. This article provides a systematic review of the effects of psychological stress on mitochondrial structure and function.

Results: A total of 23 studies met the inclusion criteria. All studies involved male laboratory animals, and most demonstrated that acute and chronic stressors influenced specific facets of mitochondrial function, particularly within the brain. Nineteen studies showed significant adverse effects of psychological stress on mitochondria and four found increases in function or size after stress. In humans, only six observational studies were available, none with experimental designs, and most only measured biological markers that do not directly reflect mitochondrial function, such as mitochondrial DNA copy number.

Conclusons: Overall, evidence supports the notion that acute and chronic stressors influence various aspects of mitochondrial biology, and that chronic stress exposure can lead to molecular and functional recalibrations among mitochondria. Limitations of current animal and human studies are discussed. Maladaptive mitochondrial changes that characterize this subcellular state of stress are termed mitochondrial allostatic load. Prospective studies with sensitive measures of specific mitochondrial outcomes will be needed to establish the link between psychosocial stressors, emotional states, the resulting neuroendocrine and immune processes, and mitochondrial energetics relevant to mind-body research in humans.