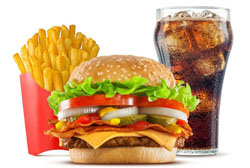 A recent study by a team at the Institute for Innate Immunity of the University of Bonn has discovered even more negative consequences as the result of a diet of fast food. Unhealthy food with a diet high in unhealthy fat and calories makes the body?s immune defenses aggressive even after switching to a healthy diet. The immune system reacts to this type of diet in a similar manner as it does to a bacterial infection. All of which leads to disease and other negative health ramifications.

The scientists put mice on a ?Western? Diet for one month. The diet was high in fat, high in sugar and low in fiber. The mice developed a strong inflammatory response throughout the body similar to symptoms with an infection with dangerous bacteria. The unhealthy diet resulted in an unexpected increase in the number of immune cells in the blood of the mice especially monocytes and granulocytes which help fight off bacteria, viruses and fungi. This indicated the involvement of immune cell progenitors in the bone marrow. To further understand these findings, bone marrow progenitors for major immune cell types were isolated from the mice fed a Western Diet and mice fed a healthy controlled diet. Genomic studies indicated the mice receiving the Western Diet did activate a large number of genes in the progenitor cells, genes responsible for proliferation and maturation. Findings indicate that fast food causes the body to very quickly recruit a powerful and huge army. When the mice were put back on their typical diet of cereal for another four weeks, the acute inflammation disappeared. However, what did not disappear was the genetic reprogramming of the immune cells and their precursors. Even after this length of time, the genes that had been turned on during the fast food diet were still active.

The scientists then examined the blood cells from 120 subjects. They identified the responsible ?fast food sensor? in immune cells. In some of the subjects, the innate immune system showed a strong training effect with researchers discovering genetic evidence of the involvement of a so-called inflammasomes. Inflammasomes are key intracellular signaling complexes which recognize infectious agents and other harmful substances which subsequently release highly inflammatory messages. In addition to the inflammatory response, this also has long-term consequences for the immune system?s responses. The Western diet changes the way in which genetic information is packaged.

This genetic material is stored in the DNA with each cell containing several DNA strands. They are typically wrapped around certain proteins in the nucleus and therefore many genes in the DNA cannot be read as they are too inaccessible. An unhealthy diet causes some of the normally hidden pieces of DNA to unwind and this area of the genetic material can be read much easier as long as the temporary unwrapping remains active. The inflammasomes trigger epigenetic changes and the immune system consequently reacts to even small stimuli with stronger inflammatory responses. This inflammatory response then accelerates the development of a variety of diseases and contributes to the growth of lipids and immune cells which will migrate to altered vessel walls which may result in serious health consequences.

These findings have important societal relevance. In recent centuries the average life expectancy has steadily increased in Western countries. That trend is currently being broken for the first time with individuals born today living an average shorter life than their parents. Too little exercise and unhealthy diets play a decisive role. The researchers strongly emphasize a healthy diet as the foundation for developing early habits that can affect long-term health.