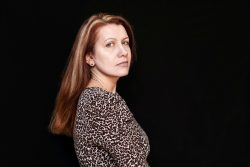 Stress affects a persons body in many ways. One of them is turning hair gray. A new study by researchers at Columbia Univ. Vagelos College of Physicians and Surgeons has now found that graying of hair can be linked to evidence of psychological stress.

When hair follicles are still under the skin, they can be influenced by stress hormones and physical things that may happen to our body and mind. When they appear on the scalp, they can harden, permanently crystallizing the exposure of stress into a more stable form.

From just looking at a hair, it seems like it’s the same color allover. But under a high resolution scanner, there will be noticeable variations in color. A new method was developed to capture highly detailed images from a human hair that had been split into tiny slices. This could show the loss of pigment or graying. This is what the study concentrated on looking at and measuring.

The hair was analyzed from 14 volunteers that kept a stress diary. They rated each week’s level of stress and documented it. Individual hairs were then analyzed as to their color. It was noted by comparing the stress diaries and the hairs that striking similarities were noticed between stress levels and colors of the hair. And, to their amazement some gray hairs regained their original color when the stress was relieved.

The researchers wanted to know more about how stress caused the hair to turn gray. To do this, they measured protein levels in the hairs and how these levels changed from the length of the hair. They discovered changes in 300 proteins when the color of the hair changed. This suggests that mitochondria may play a role when stress occurs. Mitochondria can be affected by stress and signal responses in the body.

The data shows that even though reducing stress in a person’s life is beneficial, it won’t necessarily return the hair to its former color. They noted that understanding the mechanism how aging is influenced by stress could hold clues as to how old gray hairs return to their young pre-gray state.

They concluded that hair needs to reach a certain point or threshold before turning gray. When hair is near that point because of age and other factors, stress can then push it over and transition it to gray. But if a person is older and has been gray for years, reducing stress will not darken their hair. Likewise, a young person with dark hair will not be pushed over the point to gray hair by increased stress.

The data showed growing evidence that human aging is not a fixed, linear biological process but can be halted or temporarily reversed, at least in part.

To view the original scientific study click below:
Quantitative mapping of human hair greying and reversal in relation to life stress