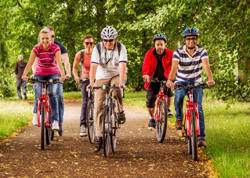 Staying active helps keep the body young and healthy! And a lifetime of regular exercise can help defy the aging process! A study conducted by researchers at the University of Birmingham and King?s College London, found that older people who had exercised all of their lives had the immunity, muscle mass and cholesterol levels of a young person.

The study included 125 amateur cyclists aged 55 to 79 ? 41 were female and 84 were male. The women had to be able to cycle 60 km in 5.5 hours and the men 100 km in under 6.5 hours. Anyone with high blood pressure or other health conditions, smokers and heavy drinkers were excluded.

The group underwent a variety of tests in a laboratory. The participants were compared to a group of adults who did not partake in regular physical activity. This group consisted of 75 healthy adults aged 57 to 80 and 55 healthy younger adults aged 20 to 36. The study showed that the active adults who exercised regularly did not show loss of muscle mass and strength. The cyclists also did not increase body fat or cholesterol levels with age and interestingly the men?s testosterone levels remained high indicating they may have avoided most of male menopause. The cyclists also had an immune system that did not seem to age either. The researchers also discovered that the thymus which makes immune cells called T cells and shrinks from the age of 20 and makes less T cells, was as active in the cyclists as those of a young person.

The research shows there is strong evidence that getting people to commit to regular exercise throughout their lives is a viable solution to living a longer, healthier life. Findings show that less than half of people over 65 do not exercise enough to remain healthy. And per Professor Janet Lord, Director of the Institute of Inflammation and Aging at the University of Birmingham, the findings debunk the assumption that aging means frailty. The studies findings indicate that the cyclists do not exercise because they are healthy, but because they had been exercising for a large portion of their lives, they are healthy. The exercise has allowed their bodies to age optimally, free from a lot of the problems caused by inactivity. Remove their activity, and the researchers agree that their health would most likely begin to decline.

Nearly everyone can exercise. It is a matter of finding an exercise that suits a person and can make a habit of it. It may lead to a later life that is healthier and productive! Hippocrates in 400 BC said ?Exercise is man?s best medicine?. Unfortunately, his message has been lost over time and we have become an increasingly sedentary society.