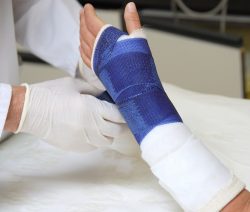 A team at the University of Illinois and the University of Pennsylvania created a new technique which uses flexible implantable bone stabilizing plates and stem cells to assist in faster healing of bone defects and large breaks. This new technique allows stem cells which are applied to break sites to experience a level of mechanical stress which they also do in developing embryos.

The forces used can help encourage stem cells to differentiate into bone and cartilage in addition to encouraging other cells within bones to regenerate. Stem cells require environmental cues to be able to differentiate into cells which make up unique tissues. Stem cells which give rise to cartilage and bone are subject to mechanical type forces during healing and development.

As a bone heals, stem cells in the bone marrow close to the break site initially become cartilage cells and at a later time bone cells. This ultimately knits the bone together. When large gaps occur between deformed and broken bones, applying more stem cells to the break sites can assist in the bones healing faster. This is achieved by either stimulating bone formation by neighboring cells or by actively participating in the regenerative process.

However, to use stem cells for the purpose of bone regeneration, they have to be delivered to the broken and defect site and then differentiate appropriately to begin repair stimulation. The team developed a unique preparation of the stem cells which can be handled and also manipulated easily for implantation and also supports the events of cellular differentiation which occur in the development of embryonic bone.

In the preparation process, stem cells are first cultured so they will link to each other to form either plugs or sheets. This preparation also contains gelatin microparticles which are loaded with growth factors which will help these stem cells differentiate. The plugs or sheets can be manipulated and then implanted which reduces the tendency of cells drifting away. These materials are called condensates.

In earlier studies, the team employed condensates in rodent models to help heal defects in the skull. They noticed the condensates remained in place and were then able to improve the extent and rate of bone regeneration.

Recently, the researchers teamed up with an assistant professor of orthopedic surgery and bioengineering at Penn Medicine to take their idea a step further. They have developed a unique and flexible fixator. Fixators are typically stiff metal bars or plates which are used to stabilize bones at their break sites. This type of fixator minimizes the degree of mechanical stress breaks will experience during the healing process.

The new flexible fixator would allow the stem cells in the condensates to experience the compressive forces which are critical to stimulating enhanced bone and cartilage formation. The team used a rat model to see how the mechanical forces would present within defects of the bone which affected the ability of the condensates to contribute to bone regeneration.

When they used condensate sheets together with the flexible fixator in rats with a femur defect, they observed there was enhanced healing and the bones actually had better mechanical function compared to control rats which received condensates and the traditional stiff fixators.

Other techniques and devices that could be developed from this new research could also help in the way physical therapy is employed after injury. The findings support the emerging paradigm called regenerative rehabilitation which is a concept that marries principles from regenerative medicine and physical therapy. The goal is to understand how mechanical stimuli influences the behavior of cells to achieve better patient outcomes without additional devices and drugs.