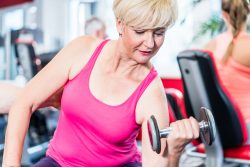 Recent research has shown that Vitamin C could help people over 50 retain muscle mass in later life. The study shows that people who are older and eat plenty of Vitamin C which is found in berries, vegetables, potatoes and citrus fruits, have the best skeletal muscle mass.

The findings are especially important because people tend to lose skeletal muscle mass as they age. This can lead to frailty, a reduced quality of life, and even sarcopenia which is a condition characterized by loss of skeletal function and muscle mass. Muscle mass loss is an important condition to prevent during aging to minimize both societal and personal costs.

People who do not consume enough Vitamin C in their diet are at risk of Vitamin C deficiency which can cause tiredness, weakness and fragile bones. In extreme cases, it can lead to scurvy. About two-thirds of our body’s total Vitamin C is found in the skeletal muscles. It is used for making carnitine which is a critical substance that provides energy for muscles to function properly and also collagen which is an essential structural component of muscle.

As we age, we lose strength and skeletal muscle mass. People over 50 lose up to 1% of their skeletal muscle mass every year. This loss is believed to affect more than 50 million people globally. It is a big problem due to the fact that it lead to a variety of poor outcomes that can lead to physically disability, type 2 diabetes, a reduced quality of life and even death.

Vitamin C consumption is linked with skeletal muscle mass. It helps defend the tissues and cells that make up our body from potentially harmful free radicals. If these free radicals are unopposed, they can contribute to the destruction of muscle which speeds up age related declines.

Until recently, few studies have researched the importance of Vitamin C intake for older adults. The team who conducted the recent study set to find out whether people who consumed more Vitamin C had more muscle mass than other people.

The team studied data from more than 13,000 people between the ages of 42 and 82 who are taking part in the EPIC (European Prospective Investigative into Cancer and Nutrition) Norfolk Study. They calculated the participant’s skeletal muscle mass and analyzed their Vitamin C intakes taken from their 7-day food diary. The team also examined the amount of Vitamin C in their blood which provides results less susceptible to possible error in reporting diet.

The statistical analysis also took into consideration other important factors such as a participant’s physical activity and energy and protein intake which can also have effects on skeletal muscle mass.

The team studied a large sample of older Norfolk residents and discovered that people with the highest amounts of Vitamin C in their blood or diet had the greatest estimated skeletal muscle mass which compared to those with the lowest amounts. They found that nearly 50% of women and nearly 60% of men were not consuming as much Vitamin C as they should. Women in the highest category of Vitamin C consumption had muscle mass 3% greater than those in the lowest category.

This study complements findings from earlier work in young and older women. In this study the team found that women who ate more Vitamin C foods not only had more muscle mass but also had much better leg function meaning they were stronger.

The findings suggest that dietary Vitamin C is important for muscle health in older women and men and may be useful in preventing age related loss of muscle. This is significant because Vitamin C is readily available in vegetables, fruits and supplements so improving the intake of this vitamin is very straightforward.

The findings promote the concept that optimal nutrition may help reduce muscle decline and further encourages and emphasizes that people of all ages follow healthy eating guidelines which includes eating a wide variety of fruits and vegetables every day.

People do not need to take mega doses of Vitamin C to get benefits. Eating a citrus fruit such as an orange every day and consuming a vegetable side as part of a meal can be sufficient for most people. And for people with dietary concerns, supplements can provide a suitable alternative.