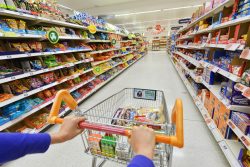 A new small scale controlled research trial, the first of its kind, has linked consumption of ultra processed foods to overeating and weight gain. People who eat these kinds of foods typically eat more calories when compared to eating a minimally processed diet.

Observational studies previously conducted looked at large groups of people had indicated associations between health problems and diets high in processed foods. However, these studies randomly instructed people to consume specific foods and then measured results. Researchers could not say for sure if the processed foods were problematic on their own or people had a variety of health problems due to other reasons.

The study conducted at the NIH’s National Institute of Diabetes and Digestive and Kidney Diseases, involved 20 adult volunteers. This was the first randomized controlled trial to examine effects of an ultra processed foods diet which are defined by the NOVA classification system. Ultra processed foods are foods that have ingredients predominantly found in industrial food manufacturing. This includes foods such as high fructose corn syrup, hydrogenated oils, emulsifiers and flavoring agents.

The people involved in the study were healthy volunteers and included 10 male and 10 female participants. They were all admitted to the NIH Clinical Center for one continuous month. In random order for two weeks, they were provided with meals made up of minimally processed foods or ultra processed foods.

An ultra processed breakfast would have included bagel with cream cheese and turkey bacon. The unprocessed breakfast would have included oatmeal with walnuts bananas and skim milk. The difference between the two diets is very subtle on the surface as both diets included eggs, beans, cereals and pastas. However, the unprocessed foods included ingredients that were fresher with no added preservatives or additives and included unrefined ingredients and whole foods.

Both diets had the same quantities of sugars, calories, fiber, fat and carbohydrates. Participants were allowed to eat as much or as little as they preferred during an hour long period. Although the current study involved just 20 adults, the results from the tightly controlled experiment indicated a consistent and clear difference between the two diets.

The research team measured changes in the participant’s appetite, insulin sensitivity, glucose and a variety of other physical and metabolic factors.

Processed foods have been linked to increased cancer risk and shorter life spans. Too much fat, too much sugar and too much salt have long been identified as culprits responsible for expanding waistlines and soaring obesity rates.

Calories add up over time which can lead to weight gain which can lead to serious health problems. Studies such as this help researchers understand the role of nutrition in health and can help people choose foods that are both accessible and nutritious.