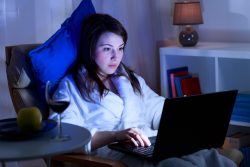 A simple tweak to a night owls sleeping patterns could help with sleep/wake timings, better eating habits, improved morning performance, and a decrease in stress and depression. Night owls are people with late waking and sleep habits.

New studies conducted by the Universities of Birmingham and Surrey in the U.K. and Monash University in Australia, have shown that over a period of three weeks it was possible to shift night owls circadian rhythm. The good news is this occurred using practical and non pharmacological interventions.

Participants in the study showed they were able to bring forward their own sleep and wake timings by two hours with no negative effects on sleep duration. Additionally, they reported decreased feelings of stress and depression and also decreases in daytime sleepiness.

The research highlights the ability of simple non pharmacological interventions to phase advance those who are night owls and reduce elements of sleepiness and mental health. And they were able to manipulate peak performances in the real world.

The study included 22 healthy adults who had an average bedtime of 2:30 a.m. and a wake up time of 10:15 a.m. For the three week period, the participants were asked to wake up 2 to 3 hours before their normal wake up time and also maximize outdoor light throughout the morning. They were also asked to go to bed 2 to 3 hours before their normal bedtime and limit their light exposure during the evening. They were instructed to keep both sleep and wake times during both free and work days. They were to have breakfast as soon as possible after waking up, eat their lunch at the same time each day, and refrain from consuming dinner after 7:00 p.m.

The studies results highlighted an increase in physical (grip strength) and cognitive (reaction time) performance during morning hours when tiredness is typically high in night owls. The study also showed a shift in peak performance time from evening to afternoon. They also noted an increase in the number of days breakfast was consumed and better well being.

By engaging in simple new routines, night owls could see their body clock adjusted which leads to overall mental and physical health. Circadian misalignment and insufficient levels of sleep can disrupt many body processes putting individuals at increased risk for cancer, diabetes and cardiovascular diseases.

Night owls seem to be more compromised than morning larks due to having to fit to school and work schedules that are not in sync with their preferred patterns. The team now wants to understand how habitual sleep patterns relate to the brain, how this also links to mental well being and if interventions can lead to long term changes.

Resetting the late timing of ‘night owls’ has a positive impact on mental health and performance.