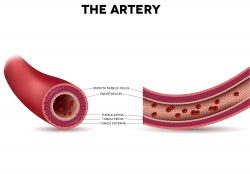 From the early 1900’s blood banks have been crucial in medical care. A team is now wanting to take the concepts a step further by utilizing stem cells in creating new arteries for people that have cardiovascular diseases. They have discovered a drug that might help decrease complications in people who undergo bypass surgery.

There are 2 cellular building blocks of arteries that are functional, one of which is smooth muscle cells. A team was able to perfect the process of building them by using pluripotent stem cells along with a drug called RepSox. The identical compound may additionally lower the risk of a possibly dangerous complication that is frequently seen in people who undergo restorative surgeries like stents, balloon angioplasty and arterial disease bypass surgery.

Growth factors that have been widely used for production of smooth muscle cells from stem cells can account for an irregular thickening known as intimal hyperplasia. Initial hyperplasia can lead to blood vessel narrowing known as restenosis. It is a frequent problem in differentiation of smooth muscle cells and if you want an artery that is useful, you do not want this risk.

Restoring the contractile ability of cells that are smooth muscle and hence facilitate better flow of blood, the team utilized high throughput screening in order to find small molecules that can overcome the problem. RepSox emerged from 4,804 different drugs. In comparison to frequently used growth factors, they discovered that RepSox inhibited intimal hyperplasisa in a rat balloon model of injury and it is less expensive and more stable.

The team thinks RepSox may additionally serve as a medication to treat restenosis in people after surgery. At the present, there are 2 FDA approved medications to address the problems and they are not cell type specific leading to side effects. The team found that RepSox suppresses intimal hyperplasia with fewer side effects.

It is hard to repair the cardiac system when damages occur, therefore, scientists are looking into various regenerative methods. One team discovered a protein known as CXCL12 could grow ancillary arteries when the major arteries of the heart are blocked. It has been found that the Hippo signaling pathway, which controls the size of organs and cell death, can prevent damage to heart muscles from repairing themselves. When the team silenced it, the heart’s ability to pump in mouse models that had heart failure was restored.

From this study the team is now nearing their goal of building arteries, but there is still lots of work ahead. This cell type is an improvement from earlier efforts, but it still isn’t mature. The team needs to generate these cells to become more mature which would make them like a native artery and make it more functional.