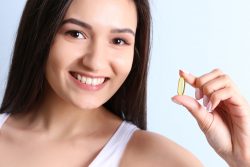 A new study has shown that fish oil can create an antidepressant response. The study used patient derived stem cells as a model for major depressive disorder to test how a patient responds to medication and also fish oil.

The University of Chicago researchers utilized stem cells from adults who had been clinical diagnosed with depression. The research has provided a number of new findings that may help scientists understand better the workings of the brain and also why some people who suffer from depression respond to drug treatments while others only experience some benefits from antidepressant medications.

The team was also excited to discover scientific evidence that fish oil which is easily procured, natural product, may effectively treat depression. Depression or major depressive disorder, is the most prevalent psychiatric disorder. About one in six people will have at least one depressive episode during their lifetime. Unfortunately, antidepressant treatments fail in about 1/3 of these patients.

From testing fish oil, the models from all the treatment-resistant patients and the treatment-sensitive patients responded. The responses were similar to what had been seen already from prescription antidepressants, but it had been produced through different mechanisms.

The team observed that fish oil was relying in part on glial cells and not neurons. For many years scientists have paid little attention to glia which is a type of brain cell that surrounds neurons. There is now more evidence than ever that glia plays a role in major depression. The recent study hints that glia cojld also be crucial for antidepressant actions.

The study has also indicated that a stem cell model could be utilized to study responses to use and that treatment with fish oil or even a companion to treatment for depression, needs increased study.

For those that want to take fish oil it is important to purchase one that is very high quality. Cheap fish oils tend to be rancid and contain PCB’s, dioxin, flame retardant chemicals and other pollutants. The more expensive fish oils such as Nordic Naturals Ultimate Omega which can be purchased at most health food stores are more much more effective. Life Code does not sell fish oil or have any financial interest in Nordic Naturals.