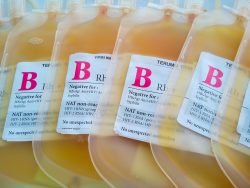 A recent study has shown that replacing half of the blood plasma with a mixture of albumin and saline reverses signs of aging and also rejuvenates brain, muscle and liver tissue in old mice. The team who conducted the research is currently finalizing clinical trials to see if a modified plasma exchange in humans could be used to treat age related diseases such as neuro degeneration, muscle wasting, immune deregulation, and type 2 diabetes, and also improve the overall health of older people.

In 2005 researchers at the University of California, Berkeley were surprised by making the discovery that making conjoined twins from old and young mice such that they share organs and blood, can rejuvenate tissues and reverse signs of aging in old mice. Their finding encouraged a large amount of research into whether a young mice’s blood might might include certain molecules or proteins that might be a fountain of youth for both mice and humans.

A new study by the same research team discovered that replacing 1/2 of the blood plasma of the older mice with a combination of albumin and saline, where the albumin replaces protein that had been lost when the original blood plasma had been removed, has the same or even stronger rejuvenation effects on the liver, brain and muscle then pairing with young mice or young blood exchange. They also found that performing the identical procedure on young mice had no negative effects on their health.

This new information alters the dominant model of rejuvenation away from young blood and towards the benefits of taking away age elevated and also probable harmful factors in old blood.

There were two interpretations of the original experiments. One is that in the mouse joining experiment rejuvenation was due to young blood and young factors or proteins that become diminished with aging. Another equally possible interpretation is that as aging occurs there is an elevation of specific proteins in the blood that become harmful and these were removed or neutralized by the young partners. The team believe as the science indicates, the correct interpretation is the second one. Young factors or blood are not needed for the rejuvenating effect as dilution of old blood is sufficient.

The composition of blood plasma in humans can be altered through a clinical procedure known as therapeutic plasma exchange or plasmapheresis which is FDA approved in the United States for treatment of a variety of autoimmune diseases. The team believe it may take a bit of time for people to give up the idea that young plasma contains rejuvenation molecules for aging. They hope their results open the door for additional research into using plasma exchange not only for aging but also for immunomodulation.

The team has found that the plasma exchange process acts about like a molecular reset button by lowering the intensity of quite a lot of pro-inflammatory proteins which become elevated as they aged. This allow more beneficial proteins like those that will promote vascularization to resurface in large quantities.

They say that some of these proteins are of interest and in the future they may look at them as current therapeutic and drug candidates. However, they believe that it is improbable that aging would be reversed by changes in just one protein. In their experiments, they found that they can do one procedure that is relatively simple and also FDA approved, yet it simultaneously changed levels of proteins in the right direction.

Therapeutic blood plasma exchange in humans takes two to three hours and has no or just mild side effects. It is used in clinical practices. The research team is about to begin clinical trials to better understand how this blood exchange could best be applied to treating a variety of human ailments caused by the aging process.