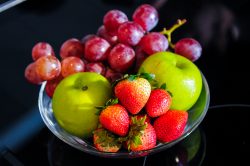 Fisetin is a natural compound found in a variety of fruits and vegetables, that has been shown to slow aging and increase lifespan. It also improves memory and brain function, protects against stress, shows anti cancer properties, and improves mood.

Fisetin works by helping to reduce the burden of damaged senescent cells which has been shown to extend lifespan and improve overall health. Scientists who have been studying fisetin believe its benefits perform as well as other antioxidants in making cells more efficient.

Research has discovered that fisetin is a very powerful senolytic which are small molecules that can selectively induce aptosis in senescent cells. Senescent cells are cells that no longer divide as we get older. When cells no longer divide they will become useless and begin accumulating in the body. Some of those malfunction and begin to emit free radicals and cytokines which gradually impairs cellular function and increases aging.

In the laboratory, scientists studied the positive effects of fisetin by studying aging mice. Some were fed their normal diet and others were fed a diet of fisetin rich foods. The mice that ate the fisetin rich foods lived about 10% longer and their bodies performed better even at a very old age.

Fisetin also helps our bodies make more glutathione which is the most powerful anti-oxidant agent in the body. Less oxidation means our cells can make more energy and help us feel better, look better, and improve health.

Fisetin is also one of many polyphenols which are antioxidants that have some unique health benefits. It is thought that polyphenols which are micronutrients found in a variety of plant based foods, can help treat and improve digestive issues, help with weight management difficulties, and help improve overall health.

Clinical trials are currently being conducted to evaluate short term benefits of intermittent treatment with fisetin to see what effect it might have on certain aspects associated with aging such as frailty. This trial is also looking for more information in regards to dosing for future use of fisetin.

Another current clinical trial involves 40 women who are between 70 and 90, are postmenopausal and are all affected by disturbances in their gait. This trial began in 2018 and will conclude in 2020. The goal is to evaluate markers and frailty in addition to looking at insulin resistance and bone resorption.

½ of the women are being given an oral dose of fisetin each day for two days in a row for a period of two months. The other ½ of women are receiving a placebo following the same schedule. With positive results, this study could lead to further development of larger clinical trials with a goal of analyzing effects of fisetin intervention on dysfunctions related to the aging process.

The foods that contain fisetin are favorites…apples, strawberries, grapes, persimmons, onions and cucumbers are some of the most popular. Strawberries have the highest levels of fisetin. Since fisetin is one of a variety of polyphenols, it is also beneficial to include other sources of this compound in your diet. Green tea, coffee, blueberries, dark chocolate and a variety of spices including cloves, star anise, and Mexican oregano are all rich sources of polyphenols. Fisetin is also found in our nutraceutical supplement Senex which contains the best natural senolytic compounds known at this time.

Fisetin is a senotherapeutic that extends health and lifespan