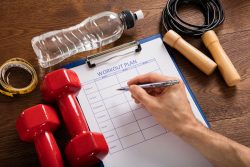 The process of aging affects your body in many different ways, including the gradual loss of muscle mass and strength. It starts as early as age 30 and amounts to about 1% loss per year. In addition some people have a condition called sarcopenia where their muscles become weak more quickly than others after they reach an older age.

Resistance exercise using barbells, dumb bells, machines, or your own weight (push ups, chin ups, etc) increases strength. This can help make up for the loss that occurs with aging which can be significant by the age of 70 or older. Also it is a whole lot easier to maintain strength than try to regain it later on. This research study explored whether just a small amount of activity daily is more helpful than a lengthier exercise workout less often.

The exercise consisted of “maximal voluntary eccentric bicep contractions” that were performed on a machine that measures muscle strength in each contraction of the muscle that you would do at a gym. An eccentric contraction is when the muscle lengthens and in this case like lowering a heavy dumbbell in a bicep curl.

Changes in muscle strength and thickness were measured and compared. The researchers found that over four weeks, people who did six contractions per day had greater increases than those doing 30 in both muscle thickness and strength. The former also saw their power output increase while performing this exercise; they could lift heavier weights after only five days of training!

The finding is important because it suggests that short, regular sessions of exercise can produce similar results to those seen after longer ones. The current thought is that you have to do lengthy sessions at the gym, noted Ken Nosaka from ECU’s College Of Health And Human Sciences, but this isn’t always necessary. Just lowering heavy dumbbells gently for 1-6 times per day will provide enough physical stimulation for your muscles without overdoing things and possibly doing more harm than good.

The bicep curl is a common exercise for weightlifters and bodybuilders, but recent research suggests it’s not the only muscle group you need to work out. While the research required participants to perform the maximum effort with this particular move early findings indicate similar results can be achieved without needing as hard or pushing up against limits.

The body seems to respond better when exercises involve eccentric contractions at smaller doses rather than bigger loads less frequently. There is still much research left to be done on why this happens, but one theory is that it may relate to how often our brain is asked to make muscles perform in a particular manner.

If we want to be effective in our fitness goals, it’s important for us not only to focus on the weekly minute goal but also make exercise a daily activity. If a person exercises once every week or ten days, the results will be different from someone who does their workout five times per week. This research together with previous studies suggests how crucial accumulating small amounts of physical activity throughout each day can become over time rather than spending hours working out all at one time.

To view the original scientific study click below:
Greater effects by performing a small number of eccentric contractions daily than a larger number of them once a week