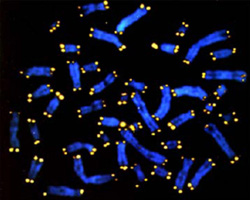 A recent study showed that “cells age faster with a sedentary lifestyle. Chronological age doesn’t always match biological age,” according to Aladdin Shadyab, PhD, lead author of the study with the Department of Family Medicine and Public Health at UC San Diego School of Medicine.

Telomeres are tiny caps found on the ends of DNA strands, like the plastic tips of shoelaces, that protect chromosomes from deterioration. As a cell ages, its telomeres naturally shorten and fray, but health and lifestyle factors, such as obesity and smoking, may accelerate that process.

The study, publishing online January 18 in the American Journal of Epidemiology, found elderly women with less than 40 minutes of moderate-to-vigorous physical activity per day and who remain sedentary for more than 10 hours per day have shorter telomeres.

The researchers also found that elderly women who sit for more than 10 hours a day with low physical activity have cells that are biologically older by eight years compared to women who are less sedentary.

Shadyab and his research team believe they are the first to objectively measure how the combination of sedentary time and exercise can impact the aging biomarker.

Nearly 1,500 women, ages 64 to 95, participated in the study. The women are part of the larger Women’s Health Initiative (WHI), a national, longitudinal study investigating the determinants of chronic diseases in postmenopausal women. The participants completed questionnaires and wore an accelerometer on their right hip for seven consecutive days during waking and sleeping hours to track their movements.

“We found that women who sat longer did not have shorter telomere length if they exercised for at least 30 minutes a day, the national recommended guideline,” said Shadyab. “Discussions about the benefits of exercise should start when we are young, and physical activity should continue to be part of our daily lives as we get older, even at 80 years old.”

Shadyab said future studies will examine how exercise relates to telomere length in younger populations and in men.