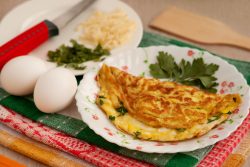 Sobering news has just come out for those who love their omelets! A new study of nearly 30,000 people has reported that adults who consumed more dietary cholesterol and eggs showed a significantly higher risk of cardiovascular disease and death from any cause.

The study conducted by Northwestern Medicine indicates that the current U.S. dietary guideline recommendations for dietary eggs and cholesterol needs to be reevaluated. The recent study looked at data of 29,615 ethnically and racially diverse adults from six prospective cohort studies.

The diet data was collected using a questionnaire for food frequency and by getting diet history. Each participant was asked what they had eaten for the previous month or year. All data was collected with a single visit. The study had up to 31 years of follow up with a median of 17.5 years. During this time 5,400 cardiovascular events and 6,132 all causes of deaths were diagnosed.

The study results found that eating 300 mg of dietary cholesterol a day (the amount found in 2 eggs) was found to be associated with a 17% higher risk of incident cardiovascular disease and 18% higher risk of all causes of death. They found that cholesterol was the main factor independent of saturated fat and other dietary fats.

The study showed that if two people consumed the same diet and the only thing different in the diet was eggs, then they could directly measure the effect eggs have on heart disease. Earlier studies found eating eggs did not raise the risk of cardiovascular disease. However, those studies had a less diverse sample, a shorter follow up timeline and limited ability to adjust for other parts of someones diet.

The study did have a major limitation of long term eating patterns which were not assessed. The study team had just one snapshot of what each individuals eating pattern looked like. However, they do think they represented a good estimate of a person’s dietary intake although any changes in a person’s diet couldn’t be accounted for.

Based on the new study, people should watch their dietary intake of cholesterol by keeping it low. Reducing foods that are cholesterol rich such as red meat and eggs is the recommendation. However, eggs and red meat are good sources of great nutrients such as iron, choline and amino acids so they don’t need to be banished for good. It would be wise to eat egg whites instead of whole eggs and red meat consumption kept to a minimum.

Associations of Dietary Cholesterol or Egg Consumption With Incident Cardiovascular Disease and Mortality.