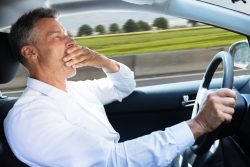 Close to half of older adults might have sleep apnea, which is a condition where sleep and breathing are briefly interrupted many times throughout the night. A recent study has shown that this chronic tiredness may have serious implications for safety on the road.

People who have sleep apnea will wake up feeling tired in the morning and it doesn’t matter how many hours they actually slept. Sleep apnea causes people to stop briefly and restart breathing dozens and even hundreds of times in a night. Even those with breathing interruptions often won’t awaken a person that has sleep apnea and will prevent them from getting into a refreshing, deep sleep.

A recent study shows a variety of how dangerous chronic tiredness from sleep apnea can be when it comes to driving. For every eight added breathing interruptions each hour, the odds of making dangerous driving moves such as braking hard, speeding and suddenly accelerating increase by 27% according to the research.

Older adults are much more likely to develop sleep apnea. In addition, they are more likely to be killed or seriously injured in an automobile accident. This discovery, has suggested that screening adults that are older for sleep apnea and then for treatment if needed, might help the older population continue driving safely for a longer period.

The percentage of adults who are older with mild sleep apnea is 30% to 50%. However, if these adults do not have sleepiness during the day or any other proof of impairment, they may not become aware they need medical attention. The findings have suggested that it might be wise to lower the threshold to evaluate adults who are older for sleep apnea and track their interruptions in breathing. If their conditions are worse by just eight interruptions per hour, that might have significant negative effects on their driving and the risk of serious injury.

People 65 and older are the more responsible drivers on our roads. They tend to obey speed limits and drive defensively. They tend to avoid driving in bad weather, at night and in places that are unfamiliar. However, changes that come with the advancement of age such as slower reflexes, deteriorating vision and sleep difficulty, can undermine even some of the safest habits.

The researchers teamed up with a driving researcher to study the relationship between risky driving behaviors and sleep apnea.

To assess the driving habits, the team installed a chip into the participant’s personal cars and monitored their driving for one year with focus on episodes of sudden acceleration, braking hard, and speeding. In total, they collected data on more than 100,000 participant’s trips. Additionally, the participants were evaluated by the team for molecular evidence of early Alzheimer’s Disease and cognitive impairments.

Although all participants were cognitively normal, almost one third had changes in their brain which was indicative of early Alzheimers. The team discovered that the frequency that the drivers made with moves that were dangerous behind the wheel increased in parallel with the frequency that their sleep had been interrupted at night. This was even though their brains did not show any markers of early Alzheimers.

Since there weren’t cameras in the participant’s vehicles, the team doesn’t know exactly what occurred that caused a participant to suddenly brake hard. An example would be not noticing a light that turned red until they got close and had to brake suddenly. The more tired a person is, the less attention they have to handle the task going on, particularly if it is constantly changing and is novel.

The study does help untangle the way risk factors that are age related, such as poor sleep and Alzheimers put older adults into danger when driving. It also might assist efforts to discover new ways to maximize safe driving for years.

To view the original scientific study click below:
Adverse driving behaviors are associated with sleep apnea severity and age in cognitively normal older adults at risk for Alzheimer’s disease