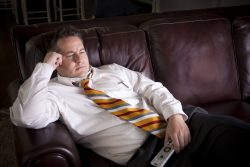 According to a recent study, 20 years of a sedentary lifestyle is linked to two times the risk of premature death when compared to being physically active. The HUNT study’s findings suggest that in order to get maximum health benefits from physical activity to protect against premature cardiovascular and all cause death, a person needs to be continually physically active.

The focus of the study was to see how changes in physical activity over a 22 year period were related to subsequent death. Most previous studies investigating the relationship between longevity and physical activity asked the participants just once what their level of physical activity was then followed them for several years. However, physical activity is a behavior that can change with many people. Therefore, it is important to see how such changes over time may relate to the risk of death in the future.

The HUNT study asked all residents of Norway who were age 20 and older to participate in their study for three time periods – 1984 to 1986, 1995 to 1997, and 2006 to 2008. At each time point the participants were asked about their duration and frequency of leisure time physical activity. The study used the data obtained from the first and third surveys.

23,146 men and women were included in the analysis. Physical activity was categorized as inactive, moderate level which was less than two hours per week, and high which was two or more hours per week. The participants were then divided into groups depending on their levels of activity at each survey date.

The data from the physical activity was linked to information in regards to deaths until the end of 2013 through the Norwegian Cause of Death Registry. The death risk in each physical activity group was compared to the reference group which was participants who reported a high level of physical activity at each survey.

When compared to the reference group, the participants who were inactive 1984 to 1986 and 2006 to 2008 showed a 2 fold higher likelihood of all cause death and a 2.7 fold higher risk of dying from cardiovascular disease. The participants with moderate physical activity at both time periods had 60% and 90% higher risks of all cause and cardiovascular deaths, respectively, when compared to the reference group.

The team notes that there are clear recommendations in regards to the amount of exercise adults should be engaging in to optimize their health. This is 150 minutes per week of moderate intensity activity or 75 minutes of a more vigorous intensity aerobic physical activity.

Another important point is that levels of physical activity even lower than the advised levels will give some health benefits. Physical fitness is shown to be more important than the amount of exercise. This includes all types of exercise that will make a person breathe heavily.

People should engage in activities they like and are encouraged to get more movement into their everyday life. The data indicates that a person can compensate for a previously sedentary lifestyle and the sooner they get active, the sooner positive results will occur. The team’s advice is to establish good exercise habits as early in life as possible. The benefits from an active lifestyle go beyond protection from premature death. They also effect the body’s cognitive function and organs. Being physically active helps people live longer and better lives.