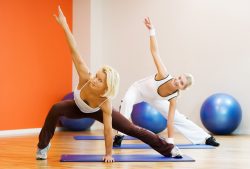 A team of biomedical engineers from Duke University have shown that human muscle possesses the natural ability to fend off some of the damage caused by chronic inflammation through exercise. Their discovery was manifested when they used engineered, grown in the lab human muscle.

There are a variety of processes that take place throughout the body through exercise. It can be somewhat difficult to differentiate which cells and systems are performing what inside the body of an active human. The team can mix and match a variety of cell types and tissue components from their engineered muscle platform and in the recent study, their discovery showed the muscle cells were able to take on anti-inflammatory measures on their own.

Inflammation can be good or bad. When a person injures their body, the first response is a low level inflammation reaction that will clear out debris and help in the rebuilding of tissue. As a response in other times, the body’s immune system will overreact and begins creating an inflammatory response that leads to damage. This is often the case in some COVID-19 situations where a deadly cytokine storm occurs. Additionally, there are a variety of diseases that also bring on chronic inflammation such as sarcopenia and rheumatoid arthritis which can lead to the wasting away of muscle and weakening its capability to contract.

There are a large variety of molecules which can lead to inflammation. Interferon gamma is a molecule that is pro-inflammatory and has been linked to a variety of muscle dysfunction and wasting. Earlier research in both animals and humans has exhibited that in general, exercising can assist in mitigating some of the results of inflammation. However, it has been challenging to differentiate what particular role these cells might play and also how they can be interacting with particular offending molecules for example, interferon gamma.

It is well known that diseases that are chronically inflammatory encourage muscles to atrophy. The team set out to see if the identical thing would occur in their engineered human muscle that was grown in the lab in a Petri dish. They not only confirmed that interferon gamma mostly works via a specific signaling pathway, they also were able to show that through exercising the muscle cells they were able to directly counter the pro-inflammatory signaling pathway separate from the presence of other tissues and cell types.

The team then set out to show proof that muscle by itself is able to block the destructive effects of interferon gamma. They used an engineered muscle platform which the lab had been developing over the previous decade. They initially grew functional, contracting human skeletal muscle in the lab and then began improving their processes by adding reservoirs of stem cells and immune cells to the mix.

The team involved in the recent study, utilized the lab-grown, fully functional muscles and overwhelmed them with high levels of interferon gamma for a period of seven days in order to copy the effects caused by long lasting periods of chronic inflammation. As the team expected, the muscle lost a large amount of its strength and it also became smaller.

They then reapplied the interferon gamma, however this time they also used a pair of electrodes to simulate an exercise regime on the muscle. They discovered that this procedure just about completely prevented the results of chronic inflammation. They also demonstrated that the simulated exercise on the muscle inhibited a particular molecular pathway contained in the muscle cells. They also showed that two particular medications that are used to treat rheumatoid arthritis also blocked the same pathway which resulted in the identical anti-inflammatory effects.

When the muscle cells were exercised, the muscles specifically were directly rivaling the pro-inflammatory signal that was being induced by interferon gamma quite to the surprise of the team. The results indicate how beneficial human muscles that are grown in the lab could be in the discovery of novel mechanisms that occur in disease and ultimately finding possible treatments. There certainly are thoughts that regimes and optimal levels of exercise could be a tool in fighting chronic inflammation while at the same time deterring over stressing cells. The hope is by using the lab engineered muscle, researchers will be able to find out if their notions could be true.