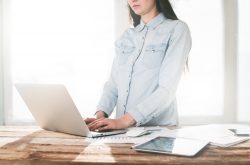 Humans are not meant to spend a great portion of their day sitting. However, a lot of people do spend even their entire days moving from chair to chair. A recent study has found that sitting can lead to a variety of health issues.

The study conducted by a team from the University of Granada (UGR), recommends that people spend more of their time standing which will help increase energy expenditure which can help them avoid health problems which are associated with a sedentary lifestyle. The study also quantifies how many extra calories a person will burn when they remain standing…45 calories more than in a sedentary state every six hours.

For the study, 53 adults were split into two groups…energy savers and energy spenders which were dependent on how much energy a person typically used when switching from lying down or sitting to standing up. While the team wasn’t quite sure why some people spend more energy than others, one factor did seem to appear to be muscle mass. The people with more muscle mass used more energy than those with less.

Energy spenders burn about 10% more energy when they switch from lying or sitting to standing. Energy savers consume very little energy in activities and the difference between lying or sitting or standing is practically nil for them.

It is really important for people to change their position. Even if a person is to get up, take 10 steps and then sit down again, it appears the effects of a sedentary lifestyle could be greatly reduced.

The research team recommends the widespread adoption of height adjustable standing desks in workplaces. These type of desks are very common in Nordic countries and the team suggests these types of desks be utilized around the globe to help reduce the risk of health issues.

The team also recommends educating school age children and young people and their teachers about the importance of avoiding long periods of time sitting down. More standing can considerably help reduce the negative consequences of sedentary lifestyle choices which can lead to obesity, excess weight and the risk of developing cardiovascular disease.