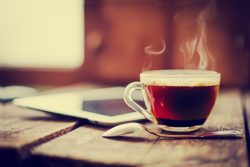 A new study conducted by a research team in Germany has found that four cups of coffee a day sets off a cellular chain of events that will protect the cells of our heart. By promoting the movement of a regulatory protein in mitochondria, function is enhanced and cardiovascular cells are protected from damage. Regulatory proteins bind to specific parts of DNA and play a role in how genes are expressed.

Mitochondria are referred to as the powerhouses of the cells and the benefits of caffeine seem to involve mitochondria. The researchers discovered a new player within mitochondria which is what appears to be relevant to caffeine’s protective effect: p27. P27 was first identified as an inhibitor of the cell cycle and is an enzyme that normally slows the division of cells. The team found that caffeine caused p27 to move into mitochondria. Once there, it triggered tasks vital for heart muscle repair after a heart attack. The team discovered that the equivalent of four or more espresso shots was sufficient to help protect from cell death, boosting processes to help the heart recover.

Previous studies have shown that caffeine consumption has been associated with lower risks for a variety of diseases, but the mechanism underlying these protective effects has not been clear. In the recent study, the team studied old, prediabetic, obese mice. The findings revealed that caffeine protected against heart damage in these mice. P27 promoted migration of endothelial cells, protected heart muscles from cell death and triggered conversion of fibroblasts into cells which contain contractile fibers which are all crucial for heart muscle repair after myocardial infraction.

The findings of the study should lead to better strategies for protecting the heart muscle from damage especially in the older populations. A new mode of action for caffeine could be one that promotes protection and repair of heart muscle through the action of p27. Enhancing mitochondrial p27 could also serve as a therapeutic strategy not only in cardiovascular disease but also in improving healthspan. The findings indicate that coffee can be part of a healthful diet.

To view the original scientific study click here: CDKN1B/p27 is localized in mitochondria and improves respiration-dependent processes in the cardiovascular system—New mode of action for caffeine