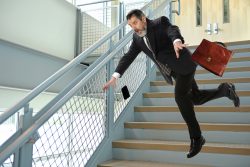 A new study has found that injuries to people distracted by their cell phones has increased quite steeply over the 20 year study period. People are falling, tripping, and hurting their necks and heads more often than ever. Some have even dubbed texting the “new drunk driving”!

While most cases are mild, some of the injuries involve lacerations to the face and traumatic brain injuries which can lead to long term and serious consequences. The current study is the first to investigate the role cell phones play in injuries to these particular parts of the body. Previous studies have observed that all types of distracted walking injuries have been on the rise.

Dr. Boris Paskhover is the author of the study and a reconstructive surgeon. He began looking into the statistics after seeing patients with facial wounds and broken jaws reported to be due to falling while staring at their phones or not paying attention to their surroundings. It is no secret that when you walk into a city, many people are just looking at their phones while carrying on with their activity.

According to the U. S. Department of Transportation, dialing or text messaging on a cell phone or a wireless device while driving was responsible for 401 fatal crashes in 2017. However, that isn’t the only way cell phone use can be distracting and potentially dangerous.

Texting while walking can also lead to accidents. 96% of people in the U. S. own a cell phone. The researchers set out to see what percentage of neck and head injuries are due to cell phone use. The study looked at 20 years of data from a database that collects information about emergency room visits in approximately 100 U. S. hospitals. They were specifically looking at the types, incidence, and mechanisms of neck and head injuries associated with cell phone usage.

From January 1988 to December 2017, 2,501 patients sought help for these type of injuries. When translated onto a national scale, the number of cases with these type injuries would amount to more than 76,000 people.

Neck and head injuries which were related to cell phone usage was relatively rare until 2007 when the rate began to sharply increase. This was the first year the iPhone was released and was followed by a much steeper increase that peaked in 2016.

Cell phone users from 13 to 29 comprised almost 40% of the patients. Most of their injuries in this age group were due to distraction. Children younger than 13 were more likely to be injured directly by the phone such as being accidentally hit by a device that was in a parent’s hand. And some were injured when their phone slipped, hit them on the face and broke their nose.

The team does acknowledge there were a few limitations to the study. The database used did not contain information about other coexisting conditions, outcomes or treatments. And the database did not include information in regards to visits to other healthcare setting such as immediate care. However, the studies findings indicate there is a need for public education about the potential risks of being distracted by cell phone usage beyond texting while driving.

Head and Neck Injuries Associated With Cell Phone Use