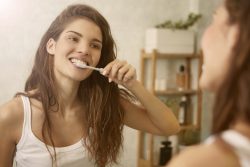 A new study has shown that brushing teeth frequently, three or more times per day, is linked to lower risks of heart failure and atrial fibrillation (A fib, a type of arrhythmia). Bacteria found in our mouths may be the key to many facets of our health. Some studies have found oral bacteria in blood clots of people who have had strokes, and experts have also linked gum disease to a significantly higher risk of hypertension. Mounting evidence is now strengthening the link between cardiovascular health and oral hygiene.

The study involved 161,286 people living in Korea between the ages of 40 and 79 and who showed no history of heart problems. All participants went through a routine medical examination between 2003 and 2004. Information was gathered on weight, height, illnesses, lifestyle, laboratory tests, oral health, and oral hygiene habits. Laboratory tests included urine tests, blood tests and blood pressure readings.

Tooth brushing of three of more times per day was associated with a 12% lower risk of heart failure and a 10% lower risk of atrial fibrillation during the 10.5 year follow-up. The findings were independent of a variety of factors including sex, age, socioeconomic status, alcohol consumption, regular exercise, comorbidities such as hypertension, and body mass index.

The study did not investigate mechanisms, however a possibility is that frequent tooth brushing reduces the bacteria in the subgingival biofilm which is bacteria living in the pocket between the gums and the teeth. Brushing thereby prevents translocation of bacteria to the bloodstream.

Although the study was limited to one country, it was a large study over a long period which strengthens their findings that tooth brushing may be linked to a lower risk of heart failure and A-fib.