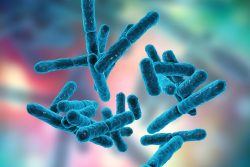 A new study conducted at McGill University shows us that the bacteria which live in our intestinal tract have an influence on how well we age. The study focused on the how the intestinal microbiota influence longevity and aging. Composition of the intestinal tract and its effects on health have been studied in the past, however just recently has aging been associated with changes in the microbiota.

Sometimes the intestines are referred to as the human’s second brain. There are over 200 million neurons which innervate it and combined with the microbiota which is the ecosystem of fungi, bacteria and microorganisms which are present in the gastrointestinal tract, they form an entity which influences our emotions, our moods and also intervene in the development of neurological diseases. The brain along with the nervous system of the intestines and the intestinal microbiota communicate bidirectionally through the gut brain axis. Different types of information are transmitted including immunological, metabolic, neruonal and endocrine all of which are derived from bacterial cells and their metabolites.

Microbiota composition varies with age and these alterations have been shown to be associated with aging and disease development. The microbiota are able to simultaneously modulate age related processes such as oxidative stress, metabolite regulation, energy homeostasis and inflammation through the gut brain axis. Microbiota therefore have been identified as a therapy against age related diseases.

The researchers in the recent study analyzed what impact three probiotics and a new prebiotic would have on the lifespan of male fruit flies. Fruit flies are about 70% similar to mammals in terms of their biochemical pathways. The intestinal microbiota varied with age which were similar to those observed in humans. The combination of probiotics and prebiotics increased the longevity of male fruit flies by 60% and using just a probiotic combination alone increased longevity by 55%.

Researchers noted that similar results were realized with similar experiments on mice and rat models. The different mixtures of probiotics had beneficial effects against memory loss, neurodegeneration, antioxidant defenses, immunity and inflammation and increased lifespan in the mice. In additional studies, probiotics were observed to increase the lifespan of C elegans (roundworms).

To maintain a healthy intestinal microbiota to help delay chronic diseases and extend lifespan, a diet rich in probiotics and prebiotics is highly recommended. Symbiotic formulations which mix probiotics and prebiotics have shown beneficial results against age related biological disorders and also for anti aging. It is hoped that in the future specific symbiotic formulas can be developed to help prevent chronic and neurodegenerative diseases.