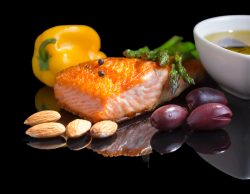 The team recruited four men and seven women who were already recreationally active. The participants were asked to follow a diet that included eating lots of fresh vegetables and fruits, olive oil, nuts, whole grains, and a moderate consumption of red wine while also avoiding processed and red meats, trans and saturated fats, refined sugars and also limiting dairy products.

Following the first four days with the participants on this predominantly plant based diet, they were asked to run 5 kilometers on a treadmill. Nine to sixteen days later the participants were asked to follow a Western diet for an additional four days and then run 5 kilometers once again. The Western diet they followed was the traditional Western diet which consists of over consumption of refined sugars, salt, and saturated fats and little intake of fresh fruits and vegetables.

The team additionally wanted to test the effects the two diets would have on muscle strengthening and anaerobic exercise. They asked the participants to take a vertical jump test, a cycle test and a hand grip test at the same time points throughout the study.

The study found that overall the participants were 6 percent faster in the 5 kilometer treadmill run after following the Mediterranean diet than they were following the Western diet. The improvement occurred even though the heart rates of the participants were about the same and ratings of perceived exertion were the same on both occasions. However, the different diets did not show any effect on performance with the anaerobic exercise.

A variety of individual nutrients that are found in foods in the Mediterranean diet improve performance immediately or within just a few days. However, the benefits were quickly lost when a switch was made back to the Western diet. The study provides an incentive not only for athletes but also the general population to eat a healthier diet such as the Mediterranean diet.