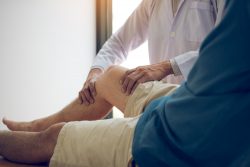 As we age our muscles become weaker and smaller and not able to heal as well after an injury. Researchers in a new study have made an important discovery to keep muscles in mice youthful. This discovery could advance the regeneration of muscle therapies for the older population.

The study shows the pattern of circulating extracellular vesicles or EVs. They deliver instructions genetically such as mRNA needed to make the longevity protein Klotho to the cells in muscles. Impaired muscle repair and loss of function of muscles in older mice can be due to older EV’s. They send less mRNA than those in younger mice. These findings are a significant advance in the understanding why the capacity for muscle regeneration lessens with age.

This news is exciting because it helps to understand the biology as to how regeneration of muscle works and doesn’t work as well as people age. Taking this information further, the hope is that EV’s can be used as therapeutics to prevent the defects related to age. EV’s may also be useful in the regeneration of other parts of the body such as organs.

The study adds to years of research showing that the blood of younger mice when given to older mice restores many tissues and cells. In the past it wasn’t clear which components conveyed the rejuvenating effects.

The team wondered if EV’s might add to the regeneration of muscles by traveling between cells through the blood and other fluids. They found that the EV’s are able to deliver information to the muscle cells.

The team collected serum from blood cells in the younger mice that remained after clotting factors. They then injected this into the older mice who had injured muscles. The mice that were given this serum showed greater regeneration of muscles and functional recovery when compared to the mice who received a placebo treatment. However, the serum’s properties to restore the muscles were lost when the EV’s were removed from the serum showing that the vesicles mediated the beneficial effects of the younger blood.

Looking deeper, the team found that EV’s deliver mRNA or genetic instructions that encode the anti-aging Klotho protein to muscle ancestor cells. These types of cells are important for skeletal muscle regeneration. Fewer copies of the Klotho instructions were collected from the EV’s in older mice than those from the younger mice. This prompted muscle ancestor cells to produce smaller amounts of the protein.

As we age, muscles do not heal as well after damage due to creation of scar tissue instead of muscle. In earlier research, the team discovered that Klotho’s regulation of regenerative capacity in muscle ancestor cells is vital and this protein declines with age.

For the first time this study shows that shifts in EV delivery due to age contributes to depletion of Klotho in older stem cells. This suggests that EV’s have the potential for new therapies to heal muscle tissue damage.

EV’s may be advantageous for boosting muscle regenerative capacity in older people and improvement of functional recovery following an injury. An exciting possibility is the engineering EV’s with specific carriers so that they can dictate the target cells responses.