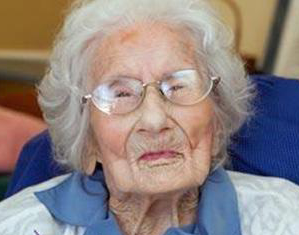 The world?s oldest living person reached another milestone Sunday when she celebrated her Sweet 116. When asked for her secret to living such a long life she said ?I mind my own business and I don?t eat junk food.?

Besse Cooper has become only the 8th person in the world and the 4th American verified to have turned that age, according to Guinness World Records.

Cooper, whose maiden name was Brown, was born on Aug. 26, 1896, in northern Tennessee the same year as comedian George Burns and writer F. Scott Fitzgerald.

In 1917 during World War I, she moved to Georgia to work as a schoolteacher. She later married Luther Cooper, and they raised four children together. He died in 1963 at age 68, according to The Walton Tribune.

Walton County officials held a ribbon cutting Friday to name a bridge in honor of Cooper, who resides in a nursing home and was unable to attend the ceremony.

?The older she has gotten the more wittier she has gotten,? Cooper?s third child, Sidney, reportedly said, adding that she had a message for the bridge-naming ceremony: ?I?m glad I gave them a reason to name it.?

Although Guinness World Records first called her the world?s oldest living person in January 2011, she lost the title when it was discovered Maria Gomes Valentin, of Brazil, was born 48 days earlier.

Valentin died on June 21, 2011, just shy of her 115th birthday, and Cooper was again crowned the world?s super senior.

Cooper could still surpass another Tennessean, Elizabeth Bolden, who was 116 years and 118 days when she died in 2006.

The person with the longest human lifespan ever recorded was Jeanne Calment, of France, who was born in 1875 and died in 1997 at the age of 122.