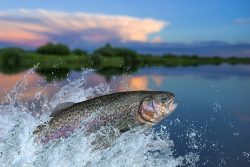 Salmon is said to have great health benefits. But, does it matter what kind of salmon you eat? Yes it does. Wild-caught salmon is by far better for you than farm-raised salmon. But why?

Wild-caught salmon is caught fresh from their natural environment, oceans, rivers and lakes. Therefore, wild salmon eat other organisms and invertebrates. This produces a salmon that has a health benefit of high mineral levels, including potassium, iron, calcium and zinc. It’s a great source of B vitamins and selenium.

Farm-raised salmon are fed a processed diet that is high in fat and protein to help produce a larger fish. Half of the salmon sold worldwide now comes from a fish farm. A process called aquaculture is used to breed the fish. The water they swim in contain contaminants and are ingested. These contaminants can include PCB’s (polychlorinated biphenyls), chlorinated pesticides and dioxins. PCB is very harmful to humans and is strongly associated with cancer and other health problems. A recent study determined the PCB levels in farm-raised salmon to be 8 times higher than wild-caught salmon.

In the fish farms the density of the salmon is quite high, which creates fish that are more susceptible to infection and disease. To counter this, the fish farms will add antibiotics to their feed. This treatment is strictly regulated in fish farms in Norway and Canada but poorly regulated in Chile, which is the world’s second largest producer.

There is quite a difference in the nutrient composition of wild-caught compared to farm-raised. Both fish have omega-3 and omega-6 in fatty acids in them. These are beneficial and play an important role in your health. Farm-raised salmon has more omega-6 fatty acid. If a person gets too much omega-6 this can cause an imbalance which can cause inflammation and lead to chronic diseases, including heart disease. Farm-raised salmon contains three times the amount of saturated fat and 46% more calories coming mostly from fat.

It is recommended to eat a fatty fish 1-2 times per week. Wild-caught salmon is higher priced that farm-raised. However, farm-raised salmon is potentially more harmful because of the contaminants, the toxins and especially the PCB level. The antibiotics can be problematic as it could increase the risk of antibiotic resistance in your gut.

Including wild-caught salmon as a regular part of your diet will help to meet nutritional needs and help reduce the risk of several diseases. It is a delicious way to improve your overall health.