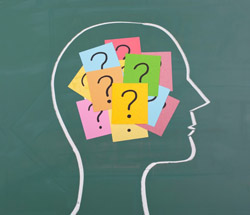 Most people suffer a decline in short term memory as they become older. It is common for instance for an elderly person to tell a friend or relative the same thing multiple times over a period of hours or days because they don’t remember they have already done so. Aging or impaired brains can once again form lasting memories if an enzyme that applies the brakes too hard on a key gene is lifted, according to University of California, Irvine neurobiologists.

“What we’ve discovered is that if we free up that DNA again, now the aging brain can form long-term memories normally,” said senior author Marcelo Wood, UCI’s Francisco J. Ayala Chair in Neurobiology & Behavior, who will present the findings at the American Association for the Advancement of Science’s annual meeting, in Austin, Texas. “In order to form a long-term memory, you have to turn specific genes on. In most young brains, that happens easily, but as we get older and our brain gets older, we have trouble with that.”

That’s because the 6 feet of DNA spooled tightly into every cell in our bodies has a harder time releasing itself as needed, he explained. Like many body parts, “it’s no longer as flexible as it used to be.” The stiffness in this case is due to a molecular brake pad called histone deacetylase 3, or HDAC3, that has become “overeager” in the aged brain and is compacting the material too hard, blocking the release of a gene called Period1. Removing HDAC3 restores flexibility and allows internal cell machinery to access Period1 to begin forming new memories.

Researchers had previously theorized that the loss of transcription and encoding functions in older brains was due to deteriorating core circadian clocks. But Wood and his team, notably postdoctoral fellow Janine Kwapis, found that the ability to create lasting memories was linked to a different process the overly aggressive enzyme blocking the release of Period1 in the same hippocampus region of the brain.