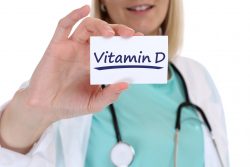 Patients who exhibit a severe deficiency of Vitamin D are twice as likely to experience significant complications from COVID-19. Led by Northwestern University, the team conducting the research studied global data from the current COVID-19 pandemic and have discovered a strong correlation between a severe Vitamin D deficiency and mortality rates in patients with the virus.

The researchers analyzed data from 10 countries and found a correlation between low levels of Vitamin D and hyperactive immune systems. Vitamin D strengthens innate immunity and also prevents overactive immune responses. These findings may explain several mysteries including why children are unlikely to die from the virus.

The statistical analyses was from data at clinics and hospitals in France, Germany, China, Iran, Italy, Spain, South Korea, the United Kingdom, Switzerland and the United States. The team observed that patients from the countries with high COVID-19 mortality rates, such as Spain, Italy and the UK, had lower levels of Vitamin D when compared to patients in the countries that were not as severely affected.

The data obtained from the study may also illuminate the mechanism of mortality and if proven, may lead to new therapeutic targets.

The team was inspired to study the vitamin after noticing unexplained differences in COVID-19 mortality rates from country to country. Some hypothesized that differences in age distributions in populations, differences in healthcare quality, testing rates, or different strains of the virus might be responsible. However, the team remained skeptical.

It appeared none of these factors seemed to play a significant role. In Italy, the healthcare system is one of the best in the world. And differences in mortality exist even when one looks across the identical age group. And while the restrictions on testing do vary, the disparities in mortality still exist when populations or countries for which similar testing rates apply. Instead, the team saw a significant correlation with a Vitamin D deficiency.

Through analyzing publicly available data from around the world, the team discovered a strong correlation between levels of Vitamin D and cytokine storm which is a hyperinflammatory condition caused by an overactive immune system, and also a correlation between the vitamin and mortality.

Cytokine storm can severely damage the lungs and can lead to acute respiratory distress syndrome and even death in patients. This is what appears to kill the majority of COVID-19 patients and not the destruction of the lungs by the virus itself, but the complications that arise from the misdirected fire from the immune system.

This is where the team believes Vitamin D plays a significant role. Not only does the vitamin enhance our innate immune system, it will also prevent our immune systems from becoming dangerously overactive. This indicates that having healthy levels of Vitamin D may protect patients against developing severe complications including death from the virus.

The analysis has shown that it might be as high as cutting the mortality rate by 50%. It will not protect people from getting the virus, but it might reduce the development of complications and prevent death in those who have been infected with COVID-19.

It is not known what dose is most beneficial and it will vary from person to person, however it is clear that a deficiency in the vitamin is harmful and it can easily be addressed with appropriate supplementation. This could be another key to helping protect the vulnerable populations such as elderly patients and African-Americans who typically have a prevalence of Vitamin D deficiency.

The Possible Role of Vitamin D in Suppressing Cytokine Storm and Associated Mortality in COVID-19 Patients.