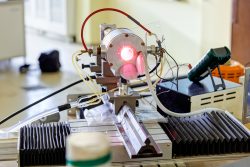 New research from the University of Johannesburg has shown that stem cells from adipose tissue replicate faster when a near-infrared laser is shined on them. A green laser can then be used to transform the stem cells into differentiated cells. These two procedures performed under laboratory conditions resulted in faster proliferation and differentiation.

When the body is injured, it can repair itself up to a point. Unfortunately some conditions are so severe that healing is limited. Stem cell therapy can help, although the success rate needs to be improved.

Adipose stem cells are found in human fatty tissue. Everyone has these and they can differentiate into most other cell types such as liver, bone, or heart cells to repair the body.

This research was done in the lab using commercial cell lines. Clinical trials on humans using lasers is a few years off.