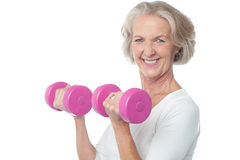 A study led by the University of Sydney in Australia has found that gradually increasing muscle strength through activities such as weightlifting improves cognitive function.

The results have been published in the Journal of American Geriatrics.

The trial involved a Study of Mental and Resistance Training carried out on patients with mild cognitive impairment between 55-68 years old. Patients with the condition have a higher risk of developing dementia and Alzheimer’s disease.

The findings are particularly significant given the high incidence of dementia and Alzheimer’s disease among the aging population. According to the 2016 World Alzheimer Report, 47 million people worldwide have dementia and this number is expected to triple by 2050.

In the United States, the figure predicted for people with Alzheimer’s disease in 2050 is 13.8 million.

Due to the high cost of care for patients with dementia, the World Alzheimer Report recommends moving beyond specialist care. The report suggests a holistic approach that focuses on improving the quality of life for people living with the condition.

Seen in this context, a link between physical training and improving brain function might be a step in the right direction.

How a disciplined weightlifting schedule can improve cognition

The trial looked at progressive resistance training such as weightlifting and the functioning of the brain.

The study examined 100 older adults living with mild cognitive impairment which refers to older patients who have cognitive difficulties that are noticeable but not significant enough to interfere with their daily activities.

For the trial, patients with mild cognitive impairment were divided into four groups and assigned a range of activities. These included a combination of resistance exercise including weightlifting and placebo resistance in the form of seated stretching. Activities also included computerized cognitive training and its placebo equivalent.

The cognitive training and placebo activities did not yield cognitive improvements.

Previous studies have shown a positive link between physical exercise and cognitive function, but the trial led by Dr. Mavros provides further information on the type, quality, and frequency of exercise needed to get the full cognitive benefits.

“The more we can get people doing resistance training like weightlifting, the more likely we are to have a healthier aging population,” says Dr. Mavros. “The key, however, is to make sure you are doing it frequently, at least twice a week, and at a high intensity so that you are maximizing your strength gains. This will give you the maximum benefit for your brain.”

This is also the first time a study has shown a clear causal link between increasing muscle strength and improving brain function in patients over 55 years old who have MCI.

Some studies have also suggested a connection between an increase in the size of certain brain areas and exercise training.

With age, the hippocampus is known to reduce in size, which leads to cognitive impairment. However, aerobic exercise has shown an increase in the size of the anterior hippocampus by 2 percent, which can improve spatial memory.

Earlier this year, a team of researchers that included Dr. Mavros released a similar test where they noticed cognitive improvement after weightlifting.

Authors of this study pointed out that it remains unclear whether physical training in itself stops the degenerative effects of old age, or whether they boost some other mechanisms that support cognition.

Although muscle strength seems to be clearly connected with cognitive impairment, the mechanism behind it is still not entirely evident.

In the future, Mavros and team hope to uncover it by connecting the increases in brain size to muscle strength and cognitive improvement.