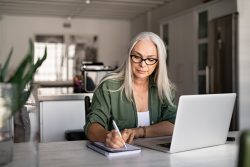 Research has shown that by training the brain we may be able to help with cognitive function improvement.

Most research for the past years has shown that the older population across the board experience a decrease in brain functioning. The new study’s team however, has suggested that may not be true.

Cognitive function is the performance of the processes of mental learning, perception, memory, reasoning, understanding, intuition, judgment and language. It also includes executive functions such as working memory, flexible thinking, and self-control.

Researchers have thought for a very long time that there is a time when people will stop making cognitive function and then a decline begins. Some of the experts believe memory in older people to be one of the most affected brain functions. Those being the most noticeable associated with age are declines in performance on attentional tasks that are complex such as divided or selective attention.

The recent study shows a much less negative picture than previous studies. This new research shows that the older population may be able to improve in some areas. People have just assumed that executive function declines with age even despite some intriguing data from smaller scale studies that have raised questions in regards to these assumptions.

The recent research studied 702 people who were in the age group of 58 to 98. They were tested for the three cognitive functions – orienting, alerting, and executive inhibition. All three processes are used constantly. As an example, when driving a car being alert at intersections is important. Orienting will occur when your attention is shifted to a movement that is unexpected such as a pedestrian and executive function will allow a person to inhibit distractions such as billboards so that they stay focused on their driving.

The team tested the participant’s functioning using the computerized Attention Network Test (ANT). This tests tells how well the participants will respond to targeted stimulus which is shown on a computer screen. The test will measure the efficiency of all three of the networks.

The team discovered that only the alerting abilities decreased. The other two networks – executive inhibition and orienting improved. The results were considered amazing and have significant consequences for how aging should be viewed. The results from the large study show that critical elements of the abilities actually will improve with aging. This is most likely due to simply practicing these skills throughout one’s lifetime.

Cognitive functioning can be improved through engagement with diverse and multiple activities. Examples are learning a new language, attending courses, learning a musical instrument and social interaction. However, the team made it clear that these interventions are promising however, more data is needed.

Evidence has shown that executive inhibitory function may improve with things such as online programs and apps although it is unclear how much any improvements broadly generalize what is trained in the programs.

Researchers need to conduct more study to fully understand what activities can help people keep their brains working optimally over the years.

To view the original scientific study click below:
Evidence that ageing yields improvements as well as declines across attention and executive functions