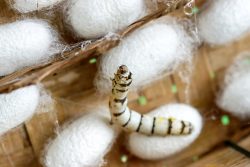 A team at Utah State University have shown that using silkworm silk for growing skeletal muscle cells will improve upon typical methods of cell culture. The hope is that this will lead to better treatments for muscles that have atrophied.

When researchers set out to understand disease and also test treatments, they will typically grow model cells on some kind of flat plastic surface such as a petri dish. However, growing cells on a surface that is two-dimensional has limitations, mostly due to the fact that muscle tissue is
three-dimensional.

The team at USU have developed a three-dimensional surface for cell cultures through growing cells on silk fibers that encase an acrylic chassis. They used both transgenic and native silkworm silk with the transgenic silkworm silk produced by silkworms that were modified with silk genes from spiders.

Previously, native silkworm silks were used as three-dimensional models for cell cultures, however this is the first time using transgenic silkworm silk for modeling of skeletal muscle.

Cells that have been grown on silkworm silk demonstrated to more closely copy human skeletal muscle than those that had been grown on typical plastic surfaces. These cells appeared to increase mechanical flexibility and also increased gene expression that is required for contraction of muscles. The silk from silkworms also encouraged proper alignment of muscle fiber which is a necessary element for achieving robust muscle modeling.

The job of skeletal muscle is to not only move the skeleton but also protect internal organs and stabilize joints. Any deterioration of these particular muscles can occur for a variety of reasons and it can happen quite quickly. An an example, following just two weeks of being mobilized, a person can lose close to a quarter of their muscle strength in their quadriceps. By understanding how muscles atrophy quite quickly must start at a cellular level through cells grown to represent reality.

The goal for the team’s research was to build better in vitro models. Cells grown on 2D platforms are not particularly realistic, although they can supply a good bit of information. Based on these results, researchers typically transition to an animal model and then move forward to clinical trials where unfortunately most fail. The current team is trying to add on to the first step through developing vitro models that are more realistic of diseased and normal tissue.

To view the original scientific study click below:
Silkworm Silk Fiber Bundles as Improved In Vitro Scaffolds for Skeletal Muscle