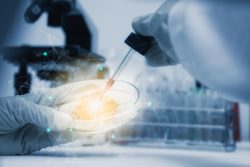 A team of researchers have discovered some key contributors that encourage human stem cell reprogramming to the naive state. This can be utilized to model early stages of development and will help scientists generate naive pluripotent stem cells quickly and efficiently. The discovery will help provide new understanding into the systems that reconfigure and destabilize cell identity involved in transitioning states of cells. The team learned more about reprogramming of naive stem cells after a genome wide function screen.

PSCs or pluripotent stem cells are useful for scientists as a tool to investigate how cells specialize in making every tissue in our body. The 2 different states they are found in are naive and primed. Both types have the ability to self-renew and then change into new types of cells, however they have different molecular characteristics and functions.

Human pluripotent stem cells in their naive state duplicate the key cellular and molecular components of cells in a pre-implantation state embryo. When naive PSCs are motivated to self-organize in certain conditions, they will create structures that are similar to early blastocyst development stage. After these cells grow in a lab, it can be determined the key actions that will take place amid human development, thus having possible uses in personalized medicine. However, there is a need to develop highly stable, high quality populations of stem cells to conduct the team’s experiment.

PSCs can be formed from either embryos or from methods to eliminate cell identity from specialized cells. Most reprogramming experiments will make primed PSCs, that are more advanced developmentally than the naive PSCs. PSCs that are naive can be gathered from human pre-implantation embryos. But, exposing primed PSCs to circumstances that allow them to develop into PSCs that are naive is more common. The current reprogramming methods are slow and inefficient which prevent researchers from rapidly producing the number of stem cells that are high quality which is what is needed.

Very little has been known in regards to what epigenetic and genetic factors are needed for reprogramming of naive stem cells and this information gap narrowed the reprogramming plan conditions.

Low adaptability of programming naive stem cells has suggested there are barriers that will inhibit cells in achieving the naive state. The team accessed the barriers by carrying out a broad scale genetic screen in the hope of identifying genes that help or hinder reprogramming. They then could identify a great amount of genes playing a critical role in PSC programming of naive cells that were not linked earlier in the process.

The researchers put their focus towards one epigenetic complex – the PRC1.3 complex. It controls gene expression and does not alter the underlying sequence and was critical to the creation of naive PSCs. Without the complex, the cells which underwent reprogramming became a totally different cell type rather than PSCs that were naive. This has suggested the activity of PRC1.3 might promote a larger amount of more cells to properly reprogram which lowers that barrier.

Following identifying the contributors to reprogramming, the team in addition considered factors that would impede reprogramming which was represented in the research by an epigenetic protein known as HDAC2. When they inhibited one factor using chemicals that were selective, then reprogramming of naive PSCs occurred more quickly and efficiently. They now had the ability to look at it from either side, remove the barriers, and reveal factors that thrust cells to state change. The research not only improves their capability to create naive PSCs that are human, but also provides information on the molecular process that will happen during the transition cell state alone, retaining some in developmental embryos.

The team is putting together bigger pieces of the puzzle, which will lead to understanding the control and formation of stem cells that are naive. Previous research identified molecular factors that helped cells maintain the naive stage. Through building up their tools to manipulate PSCs they can direct their time on important questions in regards to pre-implantation embryo. Further on, additional improvements in work with naive PSCs could create the potential for utilizing these cells in personalized cell therapies or disease models. This will require additional research to find ways to differentiate naive PSCs into cell types that are specialized.