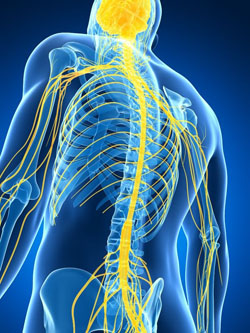 Led by researchers at University of California San Diego School of Medicine, a diverse team of neuroscientists and surgeons successfully grafted human neural progenitor cells into rhesus monkeys with spinal cord injuries. The grafts not only survived, but grew hundreds of thousands of human axons and synapses, resulting in improved forelimb function in the monkeys.

The findings, published online in the February 26 issue of Nature Medicine, represent a significant step in translating similar, earlier work in rodents closer to human clinical trials and a potential remedy for paralyzing spinal cord injuries in people.

“For more than three decades, spinal cord injury research has slowly moved toward the elusive goal of abundant, long-distance regeneration of injured axons, which is fundamental to any real restoration of physical function,” said Mark Tuszynski, MD, PhD, professor of neuroscience and director of the UC San Diego Translational Neuroscience Institute.

“While there was real progress in research using small animal models, there were also enormous uncertainties that we felt could only be addressed by progressing to models more like humans before we conduct trials with people,” Tuszynski said.

“We discovered, for example, that the grafting methods used with rodents didn’t work in larger, non-human primates. There were critical issues of scale, immunosuppression, timing and other features of methodology that had to be altered or invented. Had we attempted human transplantation without prior large animal testing, there would have been substantial risk of clinical trial failure, not because neural stem cells failed to reach their biological potential but because of things we did not know in terms of grafting and supporting the grafted cells.”

Gregoire Courtine, PhD, a professor and investigator at the Center for Neuroprosthetics and at the Brain Mind Institute, both part of the Swiss Federal Institute of Technology (EPFL) in Geneva, also conducts research seeking to restore function after spinal cord injury. He underscored the importance of the new findings.

“Dr. Tuszynski and his collaborators overcame a number of methodological difficulties specific to primates to obtain this breakthrough,” he said. “Direct translation of their work to humans would have failed, and yet too many studies are bypassing vital translational work in primate models that is necessary before human clinical trials.”

Successfully growing and proliferating functional grafted stem cells in spinal cord injuries is hindered by a multitude of innate, biological challenges. For example, the region surrounding the injury site — the so-called extracellular matrix inhibits growth in the same way that a superficial scar never resembles the original tissue in form or function. The injury site is abundant with inhibitory myelin proteins (used to make the insulating sheath around many nerve fibers) but lacks growth-promoting factors, such as neurotrophins, that would encourage regeneration of nerve cells’ axons and synapses.

Previous work by Tuszynski and others have found solutions or work-arounds for many of these obstacles, reporting notable progress using rodent models. The new work involves the use of human spinal cord-derived neural progenitor cells (NPCs) — stem cells destined to become nerve cells in the central nervous system (CNS) in rhesus monkeys, whose biology and physiology is much more similar to humans. Because the NPCs were derived from an 8-week-old human embryonic spinal cord, they possessed active growth programs that supported robust axon extension and appeared to be insensitive to inhibitors present in the adult CNS.

Two weeks after the initial injury (a period intended to represent the time required for an injured person to medically stabilize undergoing neural stem cell therapy), researchers grafted 20 million NPCs into the injury lesions in the monkeys, supported by a cocktail of growth factors and immune suppression drugs.

The work was done at the California National Primate Research Center at UC Davis. Most of the investigators are from UC campuses. “This highly complex translational project shows the value of collaborative research across UC campuses with unique facilities,” said co-author Michael Beattie, PhD, professor and director of research at the Brain and Spinal Injury Center at UC San Francisco.

Over the next nine months, the grafts grew, expressing key neural markers and sending hundreds of thousands of axons — the fibers through which nerve cells conduct signals to other nerve cells through the injury site to undamaged cells and tissue on the other side. Several months into the study, researchers noted that the monkeys began to display partial recovery of movement in their affected forelimbs.

Notably, the team documented regeneration of corticospinal axons, which are essential for voluntary movement in humans, into the lesion sites the first such known documentation in a primate model.

Courtine at EPFL, who was not involved in the study, said the findings challenge decades of work on the mechanisms of regeneration failure and “definitely represent a landmark in regeneration medicine.” Nonetheless, he noted that the degree of functional improvement remained limited. “It is not surprising given that the functional integration of new cells and connections into the operation of the nervous system would require time and specific rehabilitation procedures,” he said.

“It’s possible that given a longer period of observation, greater recovery may have occurred,” said the study’s first author, Ephron S. Rosenzweig, PhD, an assistant adjunct professor in Tuszynski’s lab. “Axon regeneration, synapse formation, myelination these all take time, and are critical for neural function. Grafts, and the new circuitry they were part of, were still maturing at the end of our observations, so it seems possible that recovery might have continued.”

Tuszynski said work remains to be done before initiating human clinical trials, including production of a candidate neural stem cell line from humans that meets requirements of the Food and Drug Administration, and additional studies of safety. His group also continues to explore ways to further enhance the growth, distance and functionality of the regenerated cells.

“We seem to have overcome some major barriers, including the inhibitory nature of adult myelin against axon growth,” he said. “Our work has taught us that stem cells will take a long time to mature after transplantation to an injury site, and that patience will be required when moving to humans. Still, the growth we observe from these cells is remarkable — and unlike anything I thought possible even ten years ago. There is clearly significant potential here that we hope will benefit humans with spinal cord injury.”

Abstract: “We grafted human spinal cord?derived neural progenitor cells (NPCs) into sites of cervical spinal cord injury in rhesus monkeys (Macaca mulatta). Under three-drug immunosuppression, grafts survived at least 9 months post injury and expressed both neuronal and glial markers. Monkey axons regenerated into grafts and formed synapses. Hundreds of thousands of human axons extended out from grafts through monkey white matter and synapsed in distal gray matter. Grafts gradually matured over 9 months and improved forelimb function beginning several months after grafting. These findings in a ‘preclinical trial’ support translation of NPC graft therapy to humans with the objective of reconstituting both a neuronal and glial milieu in the site of spinal cord injury.”