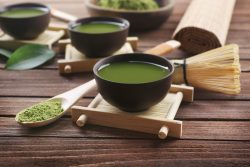 Adding Matcha Green Tea to your daily diet may improve your health and also help reduce anxiety. Experiments have shown that Matcha Tea’s anxiolytic effects happen because of the activation of dopamine D1 receptors and other serotonin receptors.

Japanese Matcha Tea has been growing in popularity around the world. This particular tea has a long history for its various medicinal purposes. The new study offers scientific evidence to support the benefits.

Recently a group of Japanese researchers from Kumamoto University have shown that anxiety in mice can be reduced after they have consumed Matcha extract or powder. The calming effects of the tea seem to be due to mechanisms which activate dopamine D1 receptors and serotonin 5-HT1A. These are both closely related to anxious behavior.

Matcha is a finely ground powder which is produced from the new leaves of shade grown Camellia sinensis green tea bushes. Not only the tea but also its food flavoring are enjoyed throughout the world. In Japan some of the historical medicinal uses for the tea include helping people relax, treatment of skin conditions and preventing obesity.

The research team set out to determine the tea’s various beneficial effects. They used the “elevated plus maze” test which is an elevated, plus shaped, narrow platform that has two walled arms which provide safety for the test subjects which are typically mice. This test is used as an anxiety test for the mice with the idea that animals which experience higher anxiety will spend more of their time in the safer walled off areas.

Researchers found that when using this test the anxiety of the mice was reduced after they consumed Matcha extract or powder. Additionally when the anxiolytic activity of a variety of Matcha extracts were elevated, an even stronger effect was discovered with an extract derived using 80% ethanol in comparison to an extract which was derived from just hot water. This means that a poorly water soluble Matcha component will have stronger anxiolytic effects than a component that is more water soluble.

A behavioral pharmacological analysis revealed that Matcha and Matcha extracts are able to reduce anxiety through activation of dopamine D1 and serotonin 5-HT1A receptors. Further epidemiological research is necessary, however the results of the current study show that Matcha may be very beneficial to the human body.