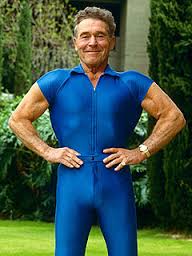 I was sitting in the front row of the auditorium when Jack LaLanne walked by in one of his famous jumpsuits. On his way up to the stage he had a spring in his step and excellent posture like a young person. The difference was that he was 87 years old. He gave an autobiographical talk about his life and how to retain youthful health and vitality. He was an excellent speaker. At one point he looked fondly at his wife and said “Each morning I get up at 4:30 AM and leave this beautiful women to work out for 2 hours. I want to see how long I can keep it going.”

When Jack was young he had a long list of health issues from headaches to behavioral problems that resulted in dropping out of high school for a year. He described himself as addicted to sugar and junk food. Then he attended a lecture by the famous nutrition expert Paul Bragg who talked about eating more natural and unprocessed foods. Jack changed his diet, started working out, and the rest is history. Besides his long running television show Jack invented exercise equipment that is still used in gyms today, started a chain of health clubs that grew to 200 locations, and performed amazing feats of endurance and strength even at the age of 70 years old that most people would not be capable of in their 20’s.

After the lecture was over a line formed of people who wanted Jack’s autograph or to have their picture taken with him. I waited until the line had disappeared and then was able to talk with Jack and his wife for about 15 minutes. He was so healthy and clear minded it was difficult to imagine that he was approaching the age of 90. He looked just like the picture above so it must have been taken close to when I met him.

The message is that at an age when most people (if they are still alive) are disabled and shuffling around a nursing home with a walker Jack Lalanne was still doing heavy duty workouts each morning and able to engage in the same activities as a young person. He aged, but he never became “old”. How long did he keep it going? He did his last 2 hour workout the day before he past away from pneumonia at the age of 96. Was all that luck or was it because he controlled his own destiny with nutrition and exercise?

Of course we are not recommending a 2 hour extensive workout each day, but the fact that a man could continue that lifestyle for so many years speaks volumes. We can’t stop our chronological age from increasing, however each year we are learning more about how to slow down and reverse many of the effects of biological aging. Don’t accept old age and disability as inevitable. The knowledge and tools to maintain youth and vitality for as long as you live are improving each year. Given the exponential increase in scientific knowledge the day is approaching when staying healthy and active even after the age of 100 becomes common.

?Anything in Life is Possible, if YOU Make it Happen!? ~ Jack LaLanne