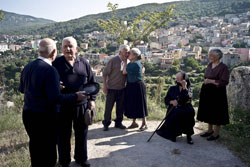 In remote Italian villages nestled between the Mediterranean Sea and mountains lives a group of several hundred citizens over the age of 90. Researchers at the University of Rome La Sapienza and University of California San Diego School of Medicine have identified common psychological traits in members of this group.

The study, publishing in International Psychogeriatrics, found participants who were 90 to 101 years old had worse physical health, but better mental well-being than their younger family members ages 51 to 75.

“There have been a number of studies on very old adults, but they have mostly focused on genetics rather than their mental health or personalities,” said Dilip V. Jeste MD, senior author of the study, senior associate dean for the Center of Healthy Aging and Distinguished Professor of Psychiatry and Neurosciences at UC San Diego School of Medicine. “The main themes that emerged from our study, and appear to be the unique features associated with better mental health of this rural population, were positivity, work ethic, stubbornness and a strong bond with family, religion and land.”

There were 29 study participants from nine villages in the Cilento region of southern Italy. The researchers used quantitative rating scales for assessing mental and physical health, as well as qualitative interviews to gather personal narratives of the participants, including topics such as migrations, traumatic events and beliefs. Their children or other younger family members were also given the same rating scales and additionally asked to describe their impressions about the personality traits of their older relatives.

“The group’s love of their land is a common theme and gives them a purpose in life. Most of them are still working in their homes and on the land. They think, ‘This is my life and I’m not going to give it up,'” said Anna Scelzo, first author of the study with the Department of Mental Health and Substance Abuse in Chiavarese, Italy.

Interview responses also suggested that the participants had considerable self-confidence and decision-making skills.

“This paradox of aging supports the notion that well-being and wisdom increase with aging even though physical health is failing,” said Jeste, also the Estelle and Edgar Levi Chair in Aging and director of the Sam and Rose Stein Institute for Research on Aging at UC San Diego.

Some direct quotes from the study’s interviews include:

?”I lost my beloved wife only a month ago and I am very sad for this. We were married for 70 years. I was close to her during all of her illness and I have felt very empty after her loss. But thanks to my sons, I am now recovering and feeling much better. I have four children, ten grandchildren and nine great-grandchildren. I have fought all my life and I am always ready for changes. I think changes bring life and give chances to grow.”

?”I am always thinking for the best. There is always a solution in life. This is what my father has taught me: to always face difficulties and hope for the best.”

?”I am always active. I do not know what stress is. Life is what it is and must be faced … always.”

?”If I have to say, I feel younger now than when I was young.”

“We also found that this group tended to be domineering, stubborn and needed a sense of control, which can be a desirable trait as they are true to their convictions and care less about what others think,” said Scelzo. “This tendency to control the environment suggests notable grit that is balanced by a need to adapt to changing circumstances.”

The researchers plan to follow the participants with multiple longitudinal assessments and compare biological associations with physical and psychological health.

“Studying the strategies of exceptionally long-lived and lived-well individuals, who not just survive but also thrive and flourish, enhances our understanding of health and functional capacities in all age groups,” said Jeste.

Abstract: This was a study of positive psychological traits in a group of rural Italians aged 90 to 101 years, and their children or other family members.

Study participants? homes in nine villages in the Cilento region of southern Italy.

Twenty-nine nonagenarians and centenarians and 51 family members aged 51?75 years, selected by their general practitioners as a part of a larger study called CIAO (Cilento Initiative on Aging Outcomes).

Participants age ?90 years had worse physical health but better mental well-being than their younger family members. Mental well-being correlated negatively with levels of depression and anxiety in both the groups. The main themes that emerged from qualitative interviews included positivity (resilience and optimism), working hard, and bond with family and religion, as described in previously published studies of the oldest old, but also a need for control and love of the land, which appeared to be unique features of this rural population.

Exceptional longevity was characterized by a balance between acceptance of and grit to overcome adversities along with a positive attitude and close ties to family, religion, and land, providing purpose in life.